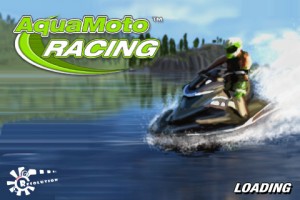 Aqua Moto Racing [App Store] is a Jet Ski racing game, which hit the App Store last month. As Resolution Interactive’s second title, Aqua Moto Racing has secured their reputation in my book as yet another developer to keep an eye out for when looking for great games. Featuring 18 tracks that take place in three different aquatic locations, Aqua Moto Racing provides a dynamite package of speed, great graphics, and the best controls of any iPhone racing game I’ve played. Add to that the $2.99 price tag and Aqua Moto Racing is a hard title to pass up.

The bread and butter of Aqua Moto Racing is the championship mode, where you race your Jet Ski against five other AI opponents in series of six races. Points are awarded at the end of every race, and if you finish in at least third place overall you will unlock the next series of races as well as earn three tuning points to spend upgrading your Jet Ski. 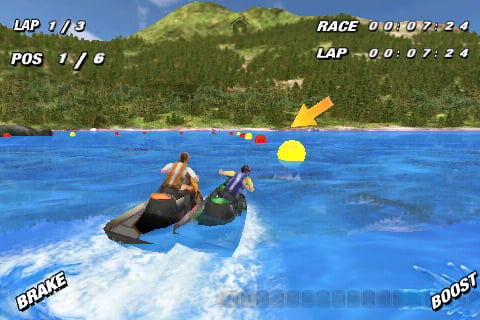 Tuning points can be spent in one of four ways: top speed, acceleration, steering, and boost. Before every race you have the opportunity to modify how you have your Jet Ski tuned, which is a nice change of pace from most games where upgrades like this are permanent. If the mini map for the upcoming track looks like it has lots of turns, take some points out of top speed and throw them in steering. Are there lots of straights in the next track? Put as many points as possible in top speed. 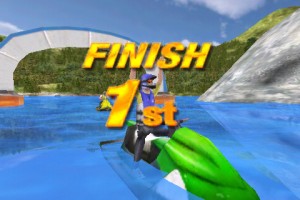 Aqua Moto Racing’s controls are flawless. You steer your Jet Ski by tilting right and left and while the sensitivity of the tilt controls are customizable, I felt they were spot-on by default. You can slow down to make it around sharp corners by touching the left side of the screen. Touching the bottom of the screen turns the camera around so you can see behind you, and touching the right side of the screen burns through your boost meter and sends you rocketing forward. To get more boost, pass buoys on the correct side and successfully land tricks.

Of course, no Jet Ski racing game would be complete without an onslaught of ramps on which to do stunts. (The first ramp you come across is in the fourth race of the first championship series.) While you’re airborne, tilting the iPhone upwards enables stunt mode–the game then goes in to slow motion, and all the interface elements are replaced with six different buttons for tricks you can perform with stars to indicate difficulty. Hold down a button to perform a trick, but be careful to release it in time to allow your racer to get back in to riding position before you land. If you don’t successfully land the stunt you’re attempting, your racer goes splashing in to the water, usually resulting in being passed by a few AI racers.

Boost helps you get more air off a ramp but, generally speaking, the small amount that you gain from landing a stunt isn’t worth the risk of falling off your Jet Ski. In my experience, once you get passed by a few of the AI racers, it is very difficult to ever make up the lost time to get back in to first. There doesn’t seem to be any mechanic in place that allows you to go faster or gain more boost when you’re behind, like a lot of racing games have, so if you fall off more than twice you’re usually better off just cutting your losses and restarting the race. 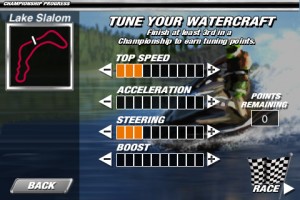 On top of racing AI opponents, Aqua Moto Racing also has a time trial mode (you can play any track you’ve unlocked by winning championships), complete with ghosts of your best time and an online leader board. One thing I found fairly odd about the leader board system is, in order to use it you must register first, which is normal, but the email confirmation is the most ambiguous thing I have ever seen. It’s little more than a plain text email referencing your “Resolution Account” making no mention of Aqua Moto Racing, high scores, or anything else remotely related. If you didn’t know that Resolution Interactive made the game, I could easily see the email getting spammed or deleted because “Resolution Account” just sounds fishy.

The graphics in Aqua Moto Racing are unbelievable for a game you’re playing on your phone. The draw distance is better than most 3D iPhone games, and there’s never any pop-in for distant objects. If you would have told me in 1996, when I was spending more time than I’d care to admit unlocking everything possible in Wave Race 64, that I’d one day be playing an equivalent game on my phone… Regardless, comparisons to Wave Race 64 are inevitable for any Jet Ski racer (even more so now that it is available on the Wii Virtual Console.) 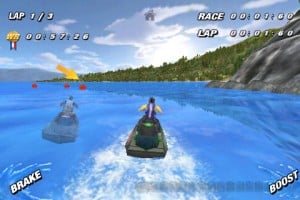 One thing that Aqua Moto Racing is missing (and I must stress I’m using the word “missing” in an extremely loose manner, as this game is great as is for the $2.99 price tag) is more activity from the water you’re racing on. I miss being able to jump big waves like in Wave Race 64; all the water in Aqua Moto Racing is remarkably calm. Another thing mysteriously absent from Aqua Moto Racing is a stunt mode, which is odd considering the emphasis put on doing stunts to gain boost. This is particularly unfortunate given how well the game’s slow motion, with a secondary interface for performing tricks, is implemented. As someone who really enjoyed Wave Race 64’s stunt mode, I could see myself spending a lot of time doing tricks and submitting scores online.

Another feature I’d love to see is some kind of track editor similar to the one recently released for SlotZ Racer [App Store]. Since the 18 included tracks are just different buoy and ramp configurations on the same three aquatic areas, I could see a top-town interface to drop buoys and ramps to save as a new track not only being great fun, but also providing infinite replay value–especially if they could be shared online.

If you enjoyed Wave Race 64 (or really any other Jet Ski game) or like racing games in general, you’ll be right at home with Aqua Moto Racing. $2.99 is a steal for a game this polished, and I can’t wait to see what Resolution Interactive puts out next.  Those on the fence can check out the limited, free Aqua Moto Racing Lite [App Store] to try before buying.

See the developer’s trailer video for a look at the gameplay.