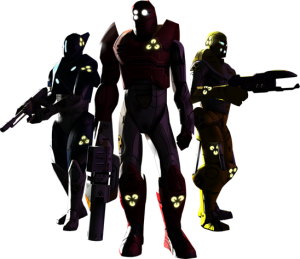 We felt somewhat obligated to review a game as huge as Eliminate Pro [App Store]. Following its epic development cycle, it’s hard to think of many other games which were as highly anticipated among our community. But it’s not just Touch Arcade forum members who have been waiting for Eliminate, as countless other developers have all been anxiously holding their breath to see how successful the microtransaction-powered gameplay is from a business perspective.

If it wasn’t apparent by now from reading our other coverage on the game, we really enjoy Eliminate. The classic four player deathmatch gameplay is enhanced with an RPG-style progression system which adds a great deal of depth to an otherwise simple game. Power-ups littered throughout the maps spice up battles, and when it’s working as intended, the matchmaking system seems to do a decent job of making sure the game you get thrown in to is reasonably matched. 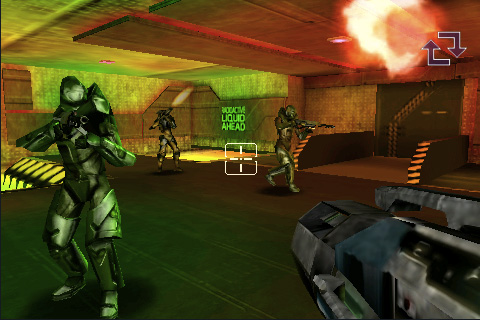 While we did feel obligated to review Eliminate Pro, since you can download and experience everything in the game for free, there isn’t much reason for me to dwell much on the gameplay. Instead, I’ll try to clear up some common misconceptions I’ve seen in comments and in forum posts, along with offering some helpful tips and hints for new players.

First off, credits make the world go round in the world of Eliminate. In order to buy weapons and equipment upgrades, you need to spend credits and your overall earnings act as your experience point total. As you earn more credits, you increase in level, unlocking more powerful weapons and armor to buy along with available upgrades for your existing equipment.

In order to earn credits, you must be energized. The first time you load the game you will start out with a full energy bar, and while you have energy every opponent who dies in a match will drop credits which can be picked up by anyone nearby. After each match, your energy decreases until you’re eventually out, at which point you have three options: Wait for a recharge in 240 minutes, buy energy via an in-game microtransaction, or continue playing for as long as you want without earning credits.

An extremely common misconception is that you can no longer play when you’re out of energy. The fact of the matter is you continue playing Eliminate for as long as you want, your character’s progress will just be stopped until the next recharge and it will take a few seconds longer for you to get matched in to a game. That’s it. If you’re happy just playing a few matches each day while earning credits and the rest of the time just playing for fun, you never need to spend a cent on Eliminate.

When the matchmaking system is working well, it should match you up with people of somewhat similar skill. Because of this, not having the best equipment shouldn’t detract from your overall performance as much as you’d think. Skill can overcome gear, as forum moderator and iPhone gaming superstar Zincous illustrated by killing a higher level forum member in a heavily armored suit and rocket launcher ten times in a row without dying once using the default (through presumably upgraded) armor and rifle. 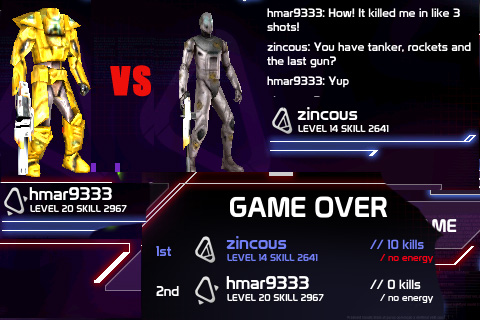 So again, you do not need energy to play Eliminate or eventually buy character upgrades in Eliminate. You can play for free as long as you’d like, your progression will just be slowed– And just because someone has better gear than you doesn’t mean you can’t mop the floor with them.

The first thing I recommend you do when you download Eliminate is make your way to the options. Changing the look sensitivity is absolutely vital to enjoying the game. I’ve been preferring a higher sensitivity, but you should try out a few different settings while fighting against bots locally to find a setting you like. From there, you can pretty much disable tap to zoom as more often than not you will only trigger the zoom functionality in the game on accident. Being able to snipe is rarely very useful in the fast paced games of Eliminate.

If you prefer the controls flipped, there’s a checkbox for that along with a checkbox for showing or hiding the on-screen directional pads in game. These obviously are personal preference settings and seem to have no effect on gameplay performance. The final option seems to be highly contested on our forums regarding whether or not to enable it, and that is auto-fire.

With auto-fire turned on, you will automatically shoot whenever an enemy is inside of your crosshairs. If you’re having trouble getting comfortable with the controls, this can make the game much more accessible early on. While this may be friendly for beginners, you should try to get used to firing on your own with this turned off as soon as possible. To fire manually, you tap your right thumb once to begin firing, then briefly lift your thumb off the screen again to stop.

Auto-fire can unintentionally reveal your location and waste bullets. This is especially important once you’ve ranked up enough to be able to buy the rocket launcher, as every single shot you make with that needs to count and it takes so long to reload that you can’t just have the game automatically firing rockets whenever an enemy crosses your path. 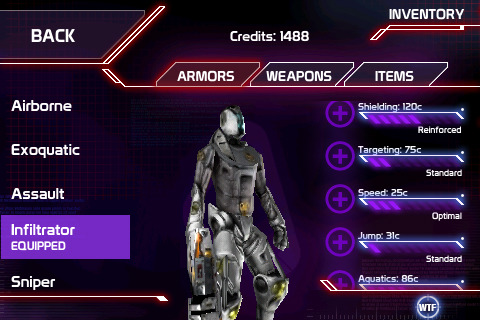 Knowing is Half the Battle

Like most death match games, knowing the maps is key. Playing against bots locally can be a great way to familiarize yourself with maps that you haven’t spent much time playing in case they come up in rotation while you’re energized. While you’re exploring these maps, look for places that you can easily get cover and where you can retreat to look for health. As you play more you will begin to learn the locations of the spawn points on the map where players reappear after they die, and the locations of your favorite power ups. With only five included maps, it won’t take you long until you have an accurate mental map of everything in game.

Speaking of power-ups, here are the included Eliminate power ups, and how to effectively use each one-

Keep in mind, only one power-up can be active at a time, and picking another one up cancels out the previous effect. The duration of power-ups can be increased by upgrading the power-up functionality of your armor, which is at the bottom of the list in the inventory page that has armor upgrades. Generally speaking the best power-up seems to be the health recharge followed closely by the berserker shield and damage amplifier depending on the situation.

Eliminate uses basic hit box detection, so aiming for the head does more damage than the body. Whenever possible try to aim at the heads of your opponents for maximum damage. If you’re in a hallway with an opponent and you’re shooting their head while they’re shooting your body, you will win and be able to recharge back to full health when you pick up their health power-up. 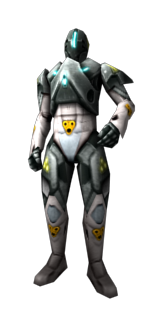 When starting out, it seems to be the most effective to save your credits to just upgrade one or two guns before other weapons. Even though the auto-rifle is your default weapon, it can pack quite a punch once you sink some credits in to it. Similarly, even though armor skins may be attractive to buy to make your guy look cool, they’re a waste of credits early on when you could be increasing your overall effectiveness to earn more credits. Don’t underestimate the power of upgrading the stats of your weapons and armor.

Taunting awards additional credits while energized, so make sure you shake your iPhone when you’re on top of any corpse. When you hear your character say “Yeah!", you’ve successfully taunted. Also, speaking of credits, once an enemy has died anyone who is energized can pick up the credits they drop. If you’re trying to maximize your income, be as crafty as possible and let other people do much of the killing only to sweep in, kill them, and clean up all the credits.

Like other death match games, framerate is important. Eliminate runs best on newer devices, but runs well enough to play on the entire line of iPods and iPhones. If you’re having performance issues, you can try restarting your device, disable automatic email checking, or even turn on airplane mode and re-enable WiFi to avoid being interrupted by calls and text messages.

Since energy is a limited resource, I recommend playing games while you’re energized while connected to reliable WiFi. Eliminate works fine over 3G, but with only a few recharges per day it’s usually best to use an internet connection that you trust instead of depending on the often questionable performance of the cellular network.

Like any video game, practice makes perfect. The first few times you play Eliminate, you will likely get owned. Play against bots locally until you have a good feel for the controls, and then expect to die quite a bit while you’re learning how to best play against human opponents. Most of all, don’t get discouraged because of a string of a few bad matches. Whenever you’re in a game where you’re being dominated by your opponents, try to observe what they’re doing to kill you so effectively and try to turn your defeat in to a lesson on a play technique you may not have thought of.

Eliminate is a great game, and I’ve really got to hand it to ngmoco for not only creating such an action packed multiplayer experience on the iPhone, but also doing it in a way that can be enjoyable for casual players who just want to dabble in the game for free along with hardcore players who have made Eliminate part of their daily routine. If you’ve read this far and haven’t already tried Eliminate, what are you waiting for? Further questions can be answered in the massive discussion thread or in our Eliminate tips thread in our forums.