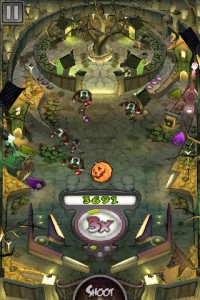 One game that we neglected on its initial release was Undead Attack Pinball — an interesting combination of a defense game and pinball.

The goal of the game is to avoid damage and ultimate destruction of your gate at the bottom of the board from hoards of zombies. You can take out these zombies through the use of the pinball itself and collect money for upgrades.

While hardcore pinball fanatics may find these gameplay changes a bit gimmicky, I find the inclusion of these in-game goals (smashing Zombies, in this case) holds my interest much more than compared to traditional pinball games. The initial version of Undead Attack! generated criticisms for the quirky ball physics, but the game has since been updated to address this issue.

The developers also recently released a Lite version so you can give the game a try yourself. The latest update of the full version released today also adds a Halloween theme and provides some additional bug fixes.