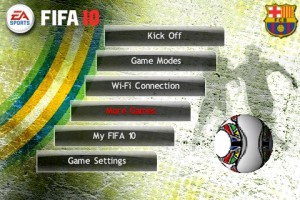 EA’s FIFA franchise carries a 16 year history of creating a sim-like soccer experience on various console and computer systems. This, of course, has led to somewhat lofty expectations for the iPhone/iPod Touch version which is a bit of a mixed bag.

FIFA 10 has a ton of content consisting of 30 leagues, 570 teams and 12,620 players as well as 20 tournaments. While some may take issue with specific team omissions, let’s not forget the depth of content that is included. FIFA offers 4 levels of difficulty: Amateur, Semi-Pro, Professional, and World Class, and 5 modes of play: Tournament, Manager, Penalty, Training and Be A Pro. There is also a local Wi-Fi mode in which you can play against your friends. 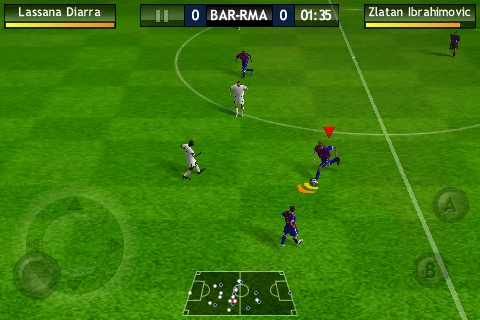 Tournament mode allows you to play in any of 20 tournaments and is where most will spend their time. The presentation of the different groupings and post-games scores are well designed and part of the enjoyment is the simplicity in which you can easily scroll through the results of the daily matches. Manager mode allows you to manage your own team and provides a set of season objectives that must be met to succeed and continue to the next season. These can be as straightforward as securing a winning to season to more difficult objectives such as winning the finals. Be A Pro is a rather interesting mode where you guide a player through a full career. You can either use an existing player from the 12,000+ included in the game or create your own. When creating your own, you can customize player attributes including speed, shooting and tackling among others as well as play a specific position (e.g. goal keeper, defender, etc.). Finally, Penalty mode pits your team against others in penalty shooting contests, where success will lead to additional contests. 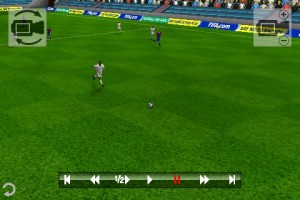 FIFA 10 also provides plenty of customization options depending on the mode of play including minutes in a half, camera angles, HUD layouts, weather conditions, time of day, commentary on/off and more. The replay system and camera angles are among the best you’ll find on the iPhone. Replays can be viewed from multiple angles, zoomed in/out, and played at various speeds.

FIFA 10 is billed as a visual extravaganza amongst soccer games, but the reality is that it could be better. While it does deliver decently designed stadiums and lush playing fields, the players themselves lack any basic facial characteristics, which is disappointing. Often, I find that the commentary audio used in sports games don’t match up well with the gameplay, but, fortunately for FIFA fans, the commentary in FIFA 10 is relatively good and some of the more accurate you’ll hear. The actual sound quality of the announcers, however, seem particularly muddled, presumably due to excess data compression to reduce the game’s size. 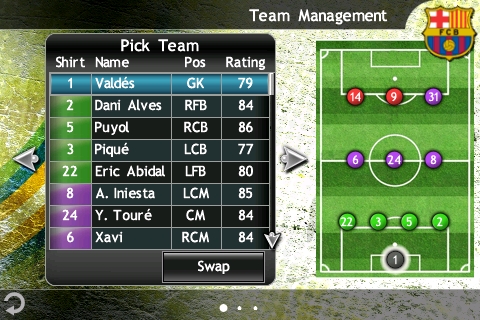 The biggest hurdle for many, however, will be the controls found in FIFA 10, especially compared to the other App Store offerings. Moving the player can be done by either a virtual d-pad or the accelerometer. Unlike Real Soccer 10 and X2 Football, however, the control pad is fixed in place rather than floating. As a result, there is the frustrating tendency for your thumb to slide off the edge of the screen especially during sprints. Meanwhile, even with sensitivity tweaks, the accelerometer’s accuracy left much to be desired.

In addition, two key action buttons—A and B (a C button is also provided when using accelerometer controls)—are provided. Through a combination of taps of these buttons, specific commands are carried out. The basic offense commands are relatively simple for passing (A), shooting (B), and sprinting (C when using accelerometer controls). However, when attempting other commands such as lobbing or attempting a 1-2 pass, the learning curve can be quite high. For example, a lobbed through ball requires sliding from B to A to B, while a 1-2 pass involves sliding from A to B to A. Even crossing a ball isn’t as easy as it sounds.

On defense, tapping on the B button will switch control from player to player, or you can simply tap on a specific player. Again, specific actions such as tackling and slide tackles require a certain combination of taps. A to B for slide tackles and while a standing tackle only involves tapping A. I understand that EA is attempting to provide a variety of moves, and the controls overall are solid after overcoming the learning curve. But at the same time, they don’t feel as accurate as they could be, especially compared to other App Store soccer games.

Once you overcome the controls, the gameplay itself is rather enjoyable with a balanced AI. Even on the Amateur setting, FIFA 10 can be challenging. The game does an admirable job creating an immersive experience from the better than average commentary to the intense gameplay. Like most soccer games, teammates can sometimes react poorly, but seems to be less of a problem with FIFA 10. Depending on your success, you also unlock rewards that provide additional training, home stadium upgrades, and even unlock an additional teams. These all contribute to a well-balanced game.

FIFA 10 is not perfect by any means, although it does offer a good deal of depth and is well-balanced in AI gameplay, with mostly top-notch graphics. EA has delivered a well-presented and well-packaged soccer experience in FIFA 10, but then again, it’s up to you to figure out all the intricacies.