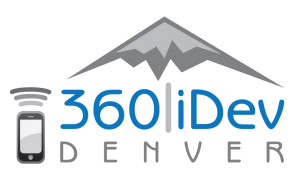 Earlier this week, various iPhone developers all made their way to the 360iDev conference held in Denver, CO to mingle with other developers, as well as participate in educational sessions that covered things like development tips, the business of the iPhone, graphics/sound design, and many other topics. As these developers returned home, many of them posted their thoughts on the conference on their blogs.

I’ve read a lot of great posts, but David of Critical Thought Games (The makers of geoDefense [$1.99] and geoDefense Swarm [99¢]) summed things up nicely on his blog, not only about 360iDev, but also about the wonderful indie-friendly gaming economy Apple has created: 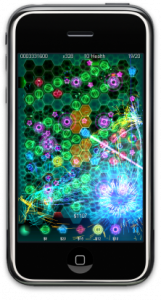 What made 360IDev so great was the people. And I’m not just talking about the friends I made there… though that was especially precious. But I’m talking about everyone as a whole. Because what I saw at 360IDev is something I haven’t seen in about 15 or 20 years. It’s a bit hard to describe… but what I liken it too is the early days of the Game Developers Conference. Back when it was small, and the people were all there with a singleness of purpose and the people who put it on were as gracious and helpful as they could be.

To be blunt, the conference was not dominated by stuffed suits, not dominated by nonsense, not dominated by people hawking stuff… there wasn’t even a single prima donna in sight! People were there to learn from each other, help each other, and band together to achieve their ambitions. The sense of community, which I feel the whole game industry lost so long ago, was a constant at this conference. It was, I realized by the second day, home.

One of the most interesting things that took place at 360iDev was the iPhone Game Jam, an all-night coding bonanza that went from 6 PM on 9/29 to the start of the first session the following morning. Anyone interested in making a game is welcome, regardless of experience level, as long as you can produce something playable.

Now, keep in mind, ten hours is hardly enough time to get a functional prototype working, so many of these games are very rough around the edges. Regardless, it’s very cool to see what everyone come up with and was able to get together under such heavy time restraints. We were sent a sneak peek of a few of these projects from the Game Jam.

Owen Goss of Streaming Colour Studios (who actually wasn’t even at the event and instead participated via web cam) came up with a game called UpDown. 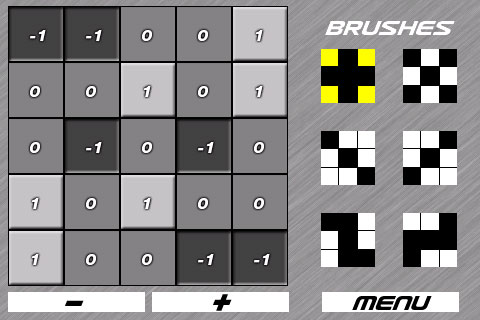 UpDown is a puzzle game. To complete a level, all pieces must be raised or lowered to level 0. However, you can only raise or lower pieces in the patterns dictated by the brushes. Strategy and intuition are required to master this simple yet challenging game.

Owen is considering building this prototype in to a full title for the App Store with other features such as a level editor to allow people to build their own puzzles. 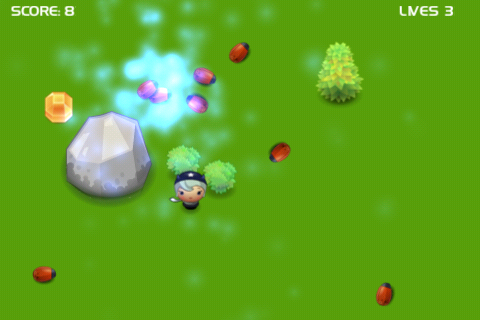 Garry also has plans to build Gravity vs. Ladybugs in to a full game, with additional game modes and a puzzle mode that requires creative use of the gravity wells to solve. 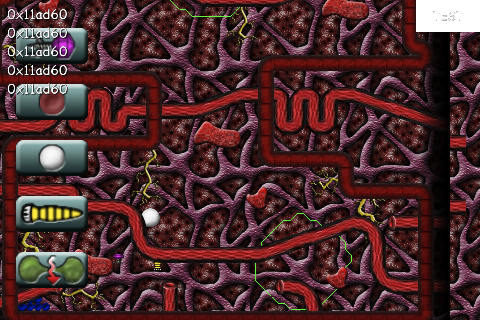 Amoeba Wars is a real time multiplayer strategy game, by Team Phobic, taking place in some molecular goop. Players must grow their amoebas by collecting resources and defeat their enemies by producing viruses and parasites.

Having only ten hours, Amoeba Wars wasn’t able to finish but managed to rough out most of the basics. Following the release of Bounce On 2, he hoped to get back to it to eventually have something to release.

Yilmaz Kiymaz of People Operating Technology somehow managed to put together Attach, the only 3D game of the Game Jam. 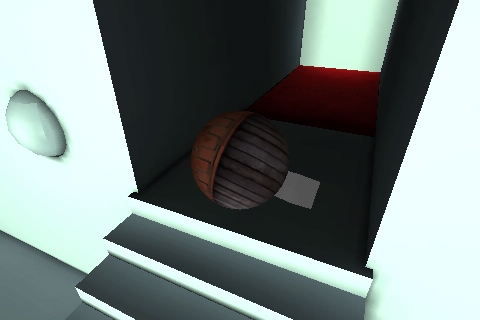 This accelerometer controlled 3D game allows a player to control an ultra sticky sphere. You can use various objects in the environment to overcome obstacles that would otherwise stop you in your tracks. For example, the sphere can’t roll up stairs on its own, but sticking objects that are lying around allows you to climb. (Remember “the animal"?) Each room has its challenges that you must overcome to continue the journey. The game was built using the Unity Engine for the iPhone in 12 hours.

Like everyone else, Yilmaz also has plans to continue development to eventually bring Attach to the App Store.

Doug Sjoquist of Sunetos had very little experience with iPhone gaming toolkits and decided to come to the Game Jam to learn how to put something together using Cocos2D and Box2D engines as a simple starting point. 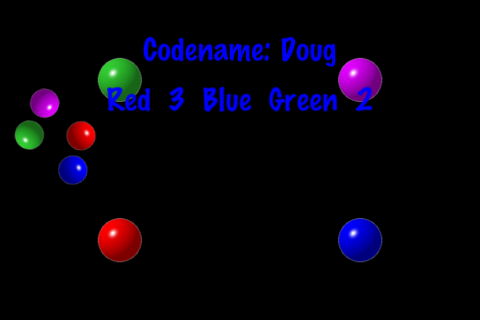 Codename: Doug is a simple first step in game development focused around rolling a marble around on screen using gravity, simple collisions, and the accelerometer. Towards the end of the night, basic gameplay elements were added and Doug thinks this has potential to turn in to something he would one day list on the App Store.

Rod Strougo of Prop and Phil Hassey (creator of Galcon) created a game that must have been inspired on some level by the swine flu outbreak at PAX this year with Conference Mania. 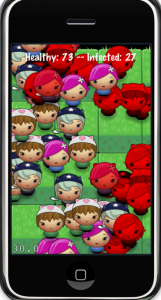 The game is called Conference Mania, and basically a very quick game where you have all these attendees moving around. Some of them get infected (swine flu – they show as red) and you have to take them out before they infect the characters next to them. It was meant as a fast paced game, most levels last a minute or so. Tim Inge provided the sound effects.

Keith Shepherd and Natalia Luckyanova of Imangi Studios put together a curious looking game with a hippo jumping off a diving board. 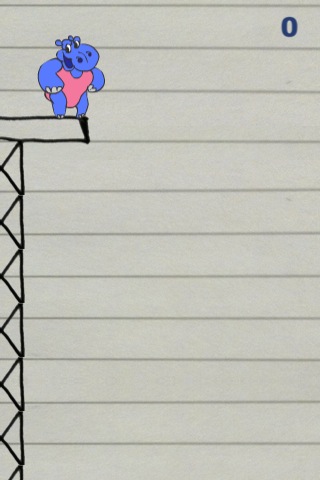 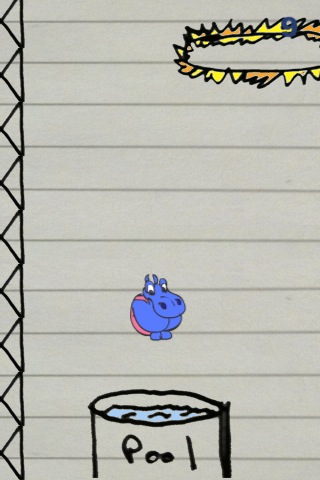 Basic Concept: Extreme high flying hippo diving! Using the accelerometer, you control the hippo as he dives off the ridiculously high diving platform. As you plummet towards the earth, try to fly through as many flaming rings as possible, and ultimately attempt to land in the teeny tiny swimming pool.

They both enjoyed their prototype, and plan on polishing it up and submitting it to the App Store within the next few weeks. 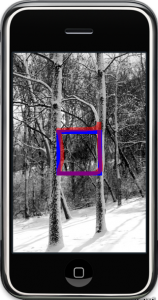 The game is inspired by the drawing-on-fogged-windows thing that kids do. You start riding in the backseat of your parents’ car on a road trip in the mountains. You start to see shapes out the window, and you blow into the mic to fog up the screen and then try to duplicate the shape before the fog fades. As the game progresses and you progress further down the mountain, the fog goes away more quickly because it’s getting warmer outside.

Nathan plans to turn Fogger in to a real game and hopefully have it on the App Store before the holidays.

Noel Llopis of Snappy Touch in collaboration with Evan from Veiled Games created Space in Stereo. 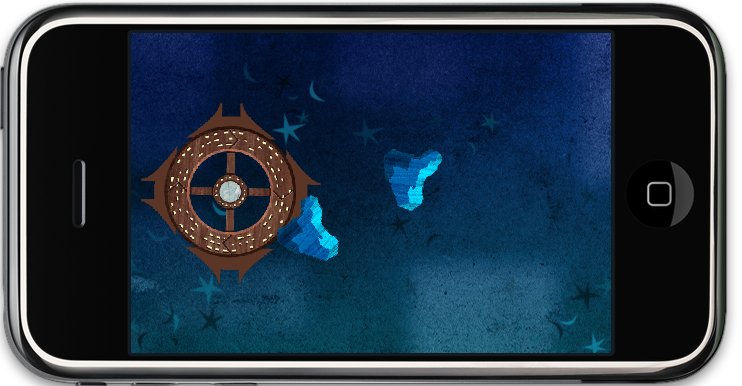 The premise is that you’re in control of a space station/ship cruising interstellar space, and you’re supposed to refuel during your travel. To do that, you drag resources (ice chunks) into the right collector in the station. You can move the station up and down and you can rotate it with two fingers. Resources can be collected by dragging them with your touch (up to 5 at the same time).

Initially there’s only one type of resource, and that’s as far as I got, but things get more interesting as you get different types of resources that would get processed in different parts of the ship, or they need to be combined before they’re sent to the ship. There will be other ones that are no good and need to be flicked away.

Noel didn’t get as far as he had hoped because of some issues with multi touch processing, but the basic mechanics are there and he is exploring the gameplay. He feels it looks promising, but it’s too early to tell.

Brian Robbins of Riptide Games put together Gravity Sling with the help of Jonathan Hartstein of Pyro Monkey Productions and Eric Lannan of Crucial Games. 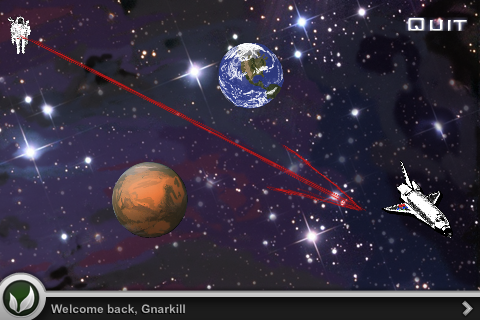 The goal of Gravity Sling is to sling the astronaut back to the space shuttle. Points are given based on how far the astronaut travels, so the player will want to try to get the astronaut to fly as far as possible before reaching the shuttle.

With the core gameplay in place, they have plans to add additional levels and polish over the next few days and have it submitted to the App Store within the next couple weeks.

There were a few other participants who didn’t email us about wanting their game being included in this article, but if you want to see the other games that were produced during the Game Jam, check out the Projects portion of the Game Jam wiki.

If you’d like to read more about the Game Jam, Dan Grigsby of Mobile Orchard provided some on-site coverage, and both Peter Bakhirev and Brian Robbins blogged about their experience.