This week we got our hands on ngmoco’s TouchPets Dogs, a title I admittedly didn’t have much interest in throughout most of its development. I fully admit that I felt that I was completely outside of the demographic that virtual pet games appeal to and I think a good part of our readership likely feels the same way. However, the latest build of the game, combined with the full realization of the cool things that are going to come out of the remarkably full featured social network they have built in to the game has transformed TouchPets Dogs in to a completely different animal.

The core gameplay has remained largely unchanged since our first looks at the game earlier. The way your dog interacts with objects along with the various animations associated with each interaction seem very refined, and at times border the edge of the canine uncanny valley, if such a thing exists. The touch gestures to interact with your virtual dogs feel very natural and the way they romp around playing with the various toys and objects can be somewhat eerie at times with how much the in-game dogs act like puppies would in real life. 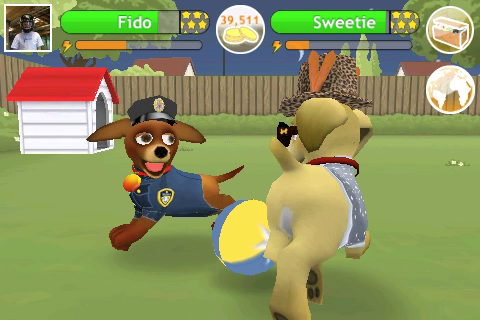 Since we last saw the game, one of the big additions is the resource management aspect. Your dog obviously needs to eat, and buying food requires spending puppy bucks. Puppy bucks are earned by keeping your dog happy by petting it, teaching it tricks, and fulfilling its other needs. Puppy bucks also can be used to buy new clothes for your dog along with accessories required for the various dog career paths previously discussed in the other previews.

The negative effects your dog can experience are limited to its various happiness statistics falling and your dog whining until you make it happy again. It can never starve or die, or really be abused in any way. You will never permanently run out of food — if you use it all you will earn more slowly over time. There will never be a point where you are unable to get more food.

The big reveal with the latest showing of TouchPets Dogs was the deep Plus+ integration in the game. We’ve always been told that the game was going to offer a social experience as you interact with your friends’ dogs, but seeing the way the whole system works really changed my opinion on the game from “I guess it sounds kind of cool" to “I can see myself getting way too involved in this game." 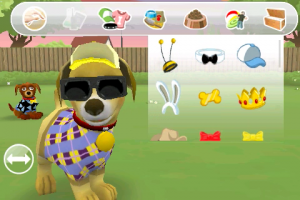 Each change to your dog’s statistics, personality, and equipment/accessory load out is constantly synchronized with the TouchPets Dogs servers via your Plus+ login. Keeping all of your dog’s information online guarantees that even if you invest hundreds of hours in to perfecting your in-game dogs, they will never be lost if your device fails or you upgrade to a new one. In addition to this, you and your Plus+ friends will have constant access to each others dogs to go on play dates.

If my dog feels like socializing, or if I feel like getting a second dog to play with, I just tap the globe icon, look through my friends list and invite their dog in to my game. This essentially grabs a snapshot of their dog off the Plus+ servers, and brings that dog with all of its statistics and equipment at the time in to my dog’s house.

For instance, I was going through the scientist career path with my dog and eventually got to a mission that required two dogs. I went online, looked through my friends’ available dogs, and invited Neil from ngmoco’s dog Comet to play. Comet arrived both hungry and dirty, so I gave him some food and a quick bath then we went on to complete the science mission. I played with both dogs enough that Comet went home happy and in the process became friends with my dog.

I know it sounds silly, but how this all works is so simple and the way the dogs interact with each other is so intriguing to watch that I walked away from the experience completely amazed with what had just transpired. On top of this, the next time Neil opens TouchPets Dogs to play with Comet, he will find that he’s well fed and clean. 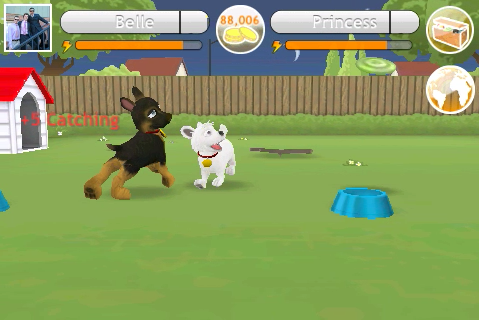 Sounds great, right? But there’s a catch: TouchPets Dogs currently can only be played with an active WiFi or 3G internet connection. ngmoco has put so much emphasis on the social aspect of the game that they seemingly have designed the interaction with other dogs as one of the primary focuses of your TouchPets experience. When I asked why there wasn’t an offline mode, various technical limitations and conflicts with the synchronization process were cited.

I had a great time with TouchPets Dogs, but I really have to question the logic behind this decision. If you have an iPhone, you’re in the clear, but I would think that most of the younger gamers that a game like this would appeal to would be playing from an iPod Touch in the backseat of a car or other places without WiFi access. With the game so close to submission to Apple, it appears unlikely that an offline mode will be included in its initial release, though they said it remained a point of discussion that they were considering.

All in all, the time I spent with the game really changed how I felt about TouchPets Dogs. The social aspects of playing with my friends’ various dogs and forming relationships with these virtual pets is an oddly captivating experience, something that I was not at all expecting from the game.