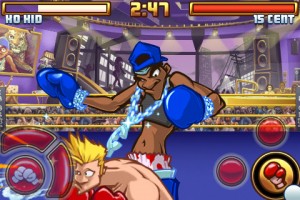 The objective is to win the title belt, but don’t let the cartoon visuals fool you. This is both an exercise in entertainment and futility as you take on 12 unique and eccentric boxers on your climb up the heavyweight ladder. As the K.O. Kid, you’ll need to conquer and win your way through each of the 3 circuits. Win every bout in a circuit to earn a belt and unlock the next circuit to take on a new cast of characters.

Super K.O. Boxing 2 has 3 modes play: Circuit is the story mode where you face the most fearsome and crazy boxers on your way to the world title. Versus mode consists of fights with previously defeated boxers. Finally, Challenge mode unlocks after winning your first circuit and presents specific objectives for winning a bout. Circuit mode is where you will spend most of your time, and you’ll need to show progress here before the other modes are unlocked. Each fight lasts 3 rounds each 3 minutes in length. Aside from the funny physical appearance of the boxers, each has unique attributes and powers that make them formidable opponents.

For example, 15 Cent is a bling-wearing, high strung boxer who can disorient you with his smile, while Chief will counterpunch you relentlessly every time you take a swing. I can’t overstate the humor in Super K.O. Boxing 2. From the strange poses and dances of opponents to the funny text dialogue exchanged between opponents in between rounds, Glu Mobile has done a solid job. 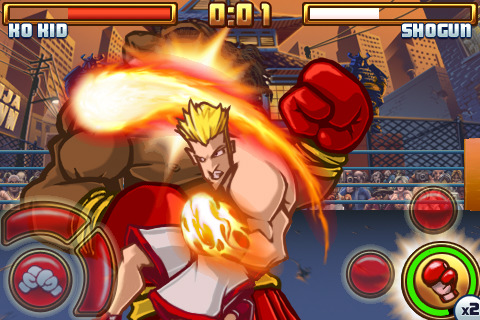 Super K.O. Boxing 2 also seems to get the controls right with two basic control options — Touch Pad and Touch Regions. Unfortunately, in-game documentation is practically non-existant so it may require some trial, error and frustration to get comfortable. Using the touch pad, throwing punches consists of tapping dual buttons to throw left/right punches. Meanwhile, touch regions allows you to tap specific parts on your opponent to throw the corresponding punch. One small hitch with touch regions is that your finger will block part of the screen which can hinder the ability to block and dodge punches in some cases.

The different types of punches that can be thrown are nicely incorporated so it becomes second nature for the player. Body shots, upper cuts and combinations are all possible in this game and require timing and practice. Most notably, hooks can be thrown through a combination of dodging and swinging at an opponent’s head.

In addition, you have other weapons at your fingertips. Part of your task will be avoiding and dodging punches. The more you’re able to dodge punches and land your own will charge up your Super Punch Energy. This is tracked in the bottom right corner, and once fully charged, you can throw a Mega Punch that will floor your opponent if landed properly. Of course, you don’t need to wait until it’s full charged to use it… it just won’t be as strong. Both you and your opponent have the ability to taunt each other, and this will also build up Super Punch Energy. Of course, you’re more vulnerable in the middle of a taunt.

The gameplay is fast paced and intense, and the AI is well balanced. Both K.O. Kid and the opponent have health gauges that recharge slightly after a knockdown. The initial fights with Big Gip and 15 Cent are relatively easy, but they ratchet up significantly as opposing boxers become adept at dodging, blocking and more importantly, going on the offensive. Challenge mode is even more difficult since you’ll be limited in what you can do within a short period of time. For example, one challenge involves knocking out an opponent in one round without using Dizzying Combos and avoids being hit even once to win. The game can also be frustrating because often after you’ve knocked down an opponent, they get up with a fully charged health gauge. This is where you will either persevere or get pummeled.

All in all, Super K.O. Boxing 2 combines great cartoon visuals with some intense gameplay. I would say that the attitude and personality the devs infused into the game shine though. This is one of those games that delivers the thrill of victory with the agony of defeat all in one well-designed package.