We first played Eliminate back at WWDC, and while there wasn’t much to the game at that time, it was clear there was potential for something remarkable. This week we played what was one of the final builds of the game before its submission to Apple, and after my limited time with the game it’s extremely difficult to find anything negative at all to say about the entire experience.

First off, in case you’ve managed to miss out on previous Eliminate (also previously known as LiveFire and KillTest) coverage, here’s the basic premise of the game– You are an employee of Arsenal Megacorp, a weapons manufacturer whose secret to success is that all their weaponry is tested on live humans.

As an employee in the company you compete in four player deathmatches with other employees either via 3G or WiFi. The premise of the game is extremely clever, and I really recommend reading the memos and watching the videos on the Eliminate web site. 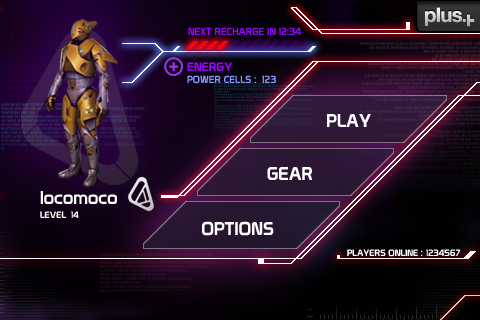 The controls work very similar to other first person shooters on the platform, with two virtual joysticks (though you can “touch anywhere") that handle your movement and aiming. Firing your weapon can either be done by tapping your left thumb on the screen, or enabling auto-fire in the game’s options. With that turned on, any time there is an enemy in your crosshairs you will automatically fire. Flicking the left side of the screen causes your view to quickly spin around, allowing you to quickly and easily target things all around you.

Tapping the bottom of the screen jumps and tapping the top brings up the menu displaying the scoreboard. The controls took a little getting used to, and after I fiddled with the sensitivity options I felt right at home and was slaughtering other Arsenal Megacorp employees in no time.

Since Eliminate is an online multiplayer game, its bread and butter is in the matchmaking system. When I was playing, there were only 10 or so players online, so I wasn’t able to see it in its full glory, but when the game goes live the matchmaking algorithm should make sure everyone is playing against players of equal skill. If you come across a match where you have one person who is destroying everyone, that person will rank up and play with a higher player pool in the next game. 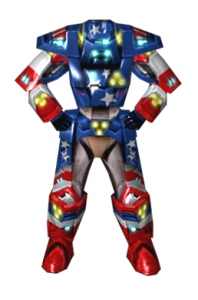 In-game credits serve as an experience point system as well as a monetary system to buy upgrades. While you’re energized, each person you kill will drop credits. Credits can then be spent on different armor types that give your character small bonuses such as higher defenses, the ability to jump higher, swim faster, and other effects. Guns are also purchased using credits, and following that everything that you’ve purchased can also be individually upgraded.

Say you really like the plasma cannon, but can’t handle its slow reload times. You can spend credits to make your gun reload faster, along with several other upgrades. This allows for nearly infinite customization between players, as while you may value reload speed on your guns with armor that allows you to move quickly, someone else might opt for armor that provides a higher defense at the cost of speed and they might focus on upgrading the raw damage output of their guns.

The energy system has caused quite a stir on our forums as users all speculated how it was going to work. The build I played was approaching the final version of the game that is set to be submitted to Apple for approval, but everything I saw and discussed came with the caveat of the fact that the whole system was still under development and none of it had been completely finalized yet.

In the current system, your energy bar consists of 20 power cells which is said to be enough for 3-4 games in which you can earn credits. When your energy is gone, you can continue to play but you won’t be able to earn credits during those games. Energy is recharged once every 90 minutes for free, but if you want it sooner there are two options: The first of which is to simply buy more energy via an in-app microtransaction (pricing to be announced). Different energy packs will be available at different rates depending on the quantity you buy.

If, however, you’re not interested in paying for energy (or waiting the 90 minutes), you can alternatively complete marketing offers in-game to earn additional energy. This method of payment system has seen great success in Facebook games, and I will be very interested to see how it does in Eliminate. The various offers you can complete range from completing a simple survey to signing up for a Discover card, and will change over time. 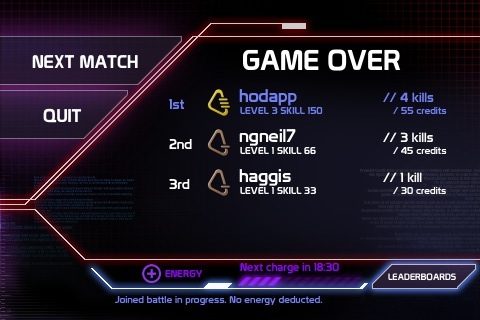 The rationale for these systems of “payment" are to support the server infrastructure to host all the games into the future. So in order to keep everything online, players can optionally chip in to keep everything running. Of course, if you don’t care about earning credits, there is nothing stopping you from playing all day long. Every 90 minutes you will be recharged and can earn more credits, but in the meantime you can keep joining online games and playing without receiving any benefit to your character level or arsenal.

I wasn’t able to test Eliminate over the 3G network, however I’ve been assured that they’ve done in-depth testing to offer a great gameplay experience both over WiFi and 3G. Game servers are also being distributed geographically, which should help keep ping times low regardless of where you’re playing from. 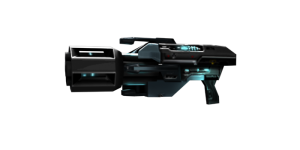 There has also been some discussion about the fact that Eliminate only feature four player deathmatches. As ngmoco explained, this was a conscience design decision that was made after weighing many factors such as what would work best between the screen real estate, hardware performance limitations, and still achieve a very fun experience. The maps are all designed for four players, and none of the games I played ever felt like something was lacking by only playing with four people. As a veteran of games like Goldeneye on the Nintendo 64, four players felt right at home for this kind of game.

ngmoco plans on listening to player feedback and has intentions to continue to support Eliminate through content updates. I also asked about additional game modes, which is also being discussed between the Eliminate development team. The initial decision to launch with only one deathmatch game mode was made so everyone would be playing in the same player pool. While they already have other game modes working internally, and are open to adding them to the game, they wanted to properly seed the initial launch to avoid fragmenting the community across deathmatch, team deathmatch, and other modes.

Even without the extra game modes, Eliminate is a ton of fun. I played through the five different maps both locally with bots and online — including soundly defeating Ngmoco CEO Neil Young (see screenshot above). The maps are all small, but most have gimmicks to them like elevators, different water elements, and even walls that slide back and forth to squish you. All of the maps have a futuristic look to them, fitting in perfectly with the art style of the already released trailers. 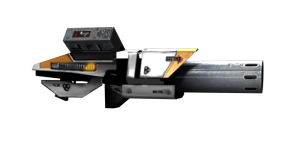 Whenever you kill someone (or someone else kills someone) and you’re energized, credits explode from their corpse. This is actually one of the elements to the game I enjoyed the most, as it is very easy to steal other people’s credits from their kills. (Note: these are “bonus" kill credits and not actually deducted from the victim’s personal stash.) When someone dies, all the nearby players run to grab the credits, and I actually found you can set up traps for other players by leaving uncollected credits around and hiding behind a corner waiting for them to come collect the seemingly unguarded credits.

In my time with the game, I was only able to buy one suit upgrade to increase my defenses along with one additional weapon, the plasma cannon, which is the Eliminate equivalent of a shotgun. The other items both were more expensive than I could afford, and also required you to be a higher player level to purchase. (Players rank up from levels 1 to 50 based on lifetime earnings.) I see tons of potential for customizing my weapon and armor load out, and I really can’t wait to get the full version of the game to give this a try.

Playing multiplayer Eliminate is one of the most impressive gaming experiences I’ve had so far on the iPhone. I walked away from the experience amazed by how far the game had exceeded my expectations, and I look forward to sitting on a train playing in a four player deathmatch with people from all over the world using my phone.