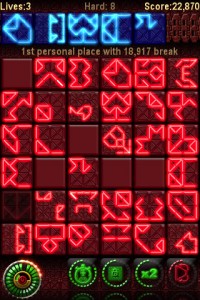 Viacheslav Klimov’s Alien Glyphs [$0.99] is an interesting new perception/matching game that has you exercising your mind in a surprisingly pressure-filled scenario. This game definitely carries a “how hard could this be?" vibe that is quickly dismissed as you start playing.

The game begins with a board of symbols. At set intervals, a new symbol slides into the top of the screen and your job is to match it with one of the symbols found on the board. Tap off a symbol and the top symbol is eliminated. Another symbol takes its place and so on. If you take too long to match up the symbol, however, the timer will run out and another symbol will appear. Take even longer and the row of symbols will fill eventually up and you lose a life. Three levels of difficulty (Easy, Medium, and Hard) should provide plenty of challenge.

Alien Glyphs tries to spice it up with Power-Ups, Power-Downs, that can be triggered or deactivated by matching quickly enough. However, I found myself too busy looking for matches to really register their presence. The game also offers multiple different skins for the glyphs if the neon red isn’t to your liking.

The developer video shows the game in action:

While the game does carry a global high score list, a few factors might affect the value of those scores. Through no real fault of the game, itself, it turns out that high-score cheating is quite easy. Even having just two people playing at once on the same iPhone would give you an enormous advantage.

The other factor is a design decision by the developer. The starting board for each game is not randomized by default. They found that randomly changing the board for each game made the game too difficult. As a result, they have 100 distinct starting sets that can be chosen either manually (or at random, if you prefer). This gives you a chance to keep practicing on the same set over time. This doesn’t actually make the as easy as it sounds as different factors can affect the positions of the glyphs in the course of a game.

As a result, the real strength of the game is the individual mental challenge it presents in what is a seemingly simple task. The overall production value of the game and music also make it stand out.