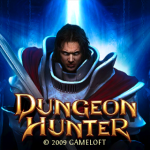 Gameloft’s Dungeon Hunter [App Store] is a hack and slash RPG easily comparable to either the Diablo or Dungeon Siege series. In the game you play as a prince who was recently resurrected to vanquish evil from your once glorious kingdom. The story doesn’t come off as particularly deep or original, but it more than gets the job done.

Your quest (and associated subquests) will have you venturing across the land and killing (almost) everything that moves in a variety of different environments. The dungeons and villages you come across are beautifully rendered, greatly adding to the fantasy atmosphere and dark mood of the game. Just like the rest of the games that Gameloft has been releasing lately, there were several moments where I experienced a “Wow, I can’t believe this is running on my phone" feeling as dimly lit corridors lead into giant expanses lit by candle with legions of skeletons to be slain. 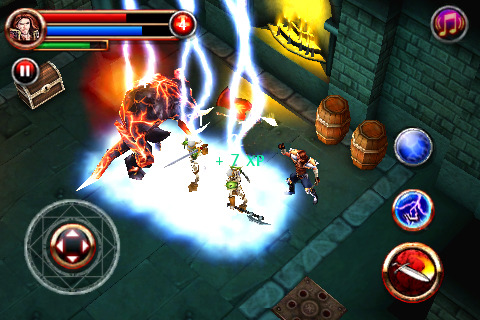 Along the right side of the screen are a series of buttons that cover both your basic attack and several magic abilities that are accessed by swiping right of left across a set of buttons next to each other that act like a virtual dial of sorts easily allowing you to quickly scroll through and select magic attacks. 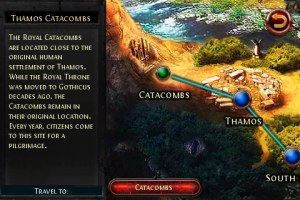 Three classes are included, each with slightly different play styles. The warrior is heavily armored and can take a beating while you slowly dispatch your opponents. The rogue is more dexterity based, and without heavy armor must quickly kill foes to avoid taking damage. The mage uses energy based attacks and a magical shield to provide some protection while zapping the evil minions you come across in dungeons.

One nice feature in Dungeon Hunter that seems to rarely be seen in single player RPG’s is both a health and mana bar that slowly regenerate on their own. You don’t need to do any kind of health or mana micromanagement to make it through a dungeon, as long as you can last through a fight you can quickly regenerate back to full. I could see some RPG purists not liking this feature, but I thought it made the game a lot more fun as there was never a point where I just needed to start a level over because I was too low on life to make it past the next fight. 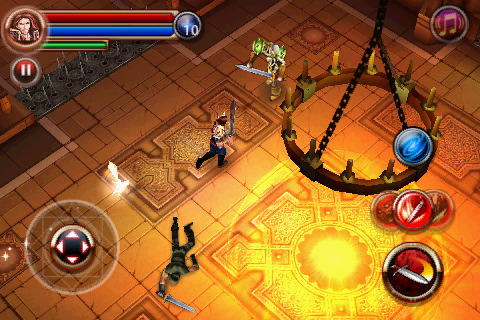 Dungeon Hunter has an impressive amount of character customization to it, almost to the point of being slightly overwhelming for a mobile game. Four statistics can be improved as you level up along with an array of skills that points can be dumped into as your character becomes more powerful. Your character can have items equipped in ten different equipment slots and your base stats combined with bonuses from magic items combine to form an extensive display of your numerical offensive and defensive ratings such as your critical strike or block chances.

While RPG veterans will be drooling at the sight of this much character depth in a portable game, I could easily see these same features being fairly frustrating to a more casual gamer as a lot of the options could be confusing if you’re not familiar with how item and stat based RPG’s work. On top of that, because of how much functionality is packed into these menu screens, most of the interface elements are very small and feel cramped.

Dungeon Hunter has an auto-equip system that will search through your items and equip the best available item for each slot, but the decisions it makes for what items you should be using seem to be based on the item level itself and not necessarily what class you’re playing. For instance, I picked up a magic wand and the auto-equip button absolutely insisted I equip it on my rogue even though I had weapons that increased my dexterity that were better for my character. 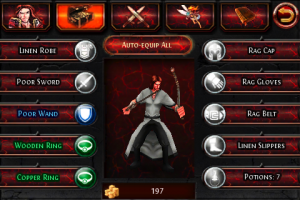 On the same menu screens you will also be able to select one of the five fairies you will eventually pick up during your adventure that each come with their own offensive and defensive perks. These fairies all have different elemental powers associated to them and have highly creative names like “Wetty" and “Windy". (I bet you can’t guess which elements they represent!)

Unfortunately, the dungeons themselves as well as the enemy spawns aren’t randomized, but with the three character classes each providing a different spin on the gameplay, gamers who enjoyed their first romp through Dungeon Hunter will likely easily enjoy their second and third with the other classes. There are also four save slots in the game, so you will have more than enough room for three play throughs.

The pacing of Dungeon Hunter feels very good, and unlike Zenonia, I never ran into an area where I needed to grind for experience before going to the next. Quests are plentiful, and are given through characters in game with World of Warcraft-style exclamation marks above their heads. These quests cover the standard array of quest types that you would expect in an RPG such as finding an item, to talking to a person, killing a particular monster, etc.

If you like collecting loot, Dungeon Hunter is the game for you. The amount of items that drop from monsters or come out of barrels and chest is downright ridiculous at times. Nearly everything you kill will drop gold, and often an item. Chests are loot piñatas, and opening one almost always results in an explosion of gold and items. Your character can hold a near infinite amount of wealth because you can instantly transmute any item you pick up into gold regardless of where you are. 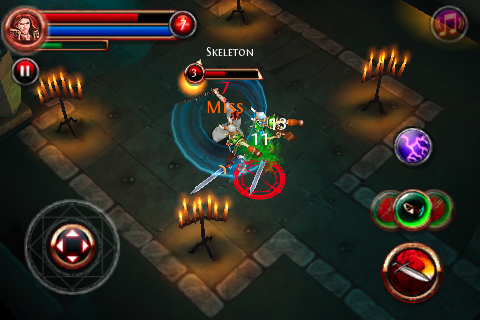 Outside of really high end magical items that are sometimes available from merchants, I was never in a situation where I didn’t have enough gold to buy extra potions or other upgrades. I suppose hardcore RPG players might find the silly in-game economy to be annoying since there are rarely any financial goals that you have to work for, but similar to the regenerating health and mana bars and lack of grinding I thought this made the game more fun.

Dungeon Hunter does so many things right that it’s really hard to get too worked up over the areas in the game that are lacking. The game doesn’t auto-save when you quit, so if you get a phone call you will start back at the last checkpoint. This isn’t as annoying as it sounds as you will hardly ever lose more than five minutes of progress, but still borders on unacceptable for an iPhone game. The load times can be long, even on my iPhone 3GS, although this is somewhat expected in graphically intensive games.

Forum members have complained about the level of difficulty in the game, and I agree that Dungeon Hunter is on the easy side. There isn’t any way to increase the difficulty of the game and I rarely ever found myself in a situation where I got close to dying. I hope in the future Gameloft either adds the ability to increase the difficulty of the game or adds some kind of unlockable game modes that either up the difficulty or provide another twist on gameplay. I’d love to see something similar to Diablo II‘s hardcore mode where you only have one life to make it through the whole game.