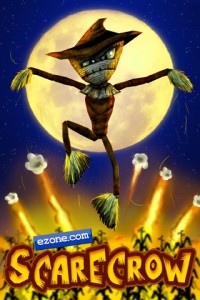 Ezone’s latest iPhone game Scarecrow [$0.99] seems to be trying to edge its way into the casual iPhone game hall of fame. While sharing the same basic goals as the likes of Doodle Jump, Scarecrow also succeeds in mixing it up enough to avoid feeling like just another knockoff.

Like their predecessors, the scarecrow wishes to go high… very high. Instead of jumping on platforms, however, scarecrow is propelled by popping kernels of corn. Make sure to hit enough of them as you ascend to keep your momentum going. Hitting the explosive corn also recharges your own personal boost that can be triggered by tapping on the screen. This supply is limited so you need to use it sparingly.

Your path is hindered by a number of obstacles including chainsaws, spikes, and more that threaten to dismember you as you ascend. You can take a fair amount of damage to where you are just left with a torso flying upward.

If you’ve played other similar games, you can easily imagine the compelling nature of trying to get just a little higher. Scarecrow uses Ngmoco’s Plus+ network for high score tracking and even allows Push challenges to your friends. Overall, a simple and fun game for only $0.99.