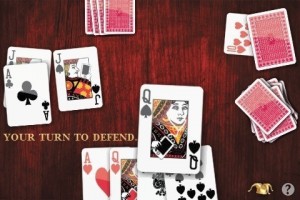 While there is no shortage of card games for the iPhone, Lost Token’s Durak [$0.99] seems to have distinguished itself over time, generating a loyal following along with a couple of glowing (one, two) TouchArcade user reviews.

Durak is a popular Russian card game typically played between two to six people (two to four in the iPhone version). Each player receives six cards and the objective is to get rid of all your cards. The game is a trump-card based game where players take turns being on the attack. Attacking involves placed a card down face up. The defending player must place a card of higher value with the same suit or a trump card. Attacks can continue if you have additional cards in your hand whose face values that match any of the cards in play. If the defender can’t defend, then they must take all the cards into their own hand. If the defender does successfully defend the attacks, all the cards get swept into the “graveyard" and remain out of play. The goal is to get rid of all your cards.

The iPhone implementation of Lost Token’s Durak really is top notch, with a natural touch interface, as well as clear efforts to make the game accessible to new players. At any time during a game you can tap on a help icon to tell what you are supposed to do. Durak also offers local multiplayer over Wi-Fi, 3 levels of difficulty, and customizable cards based on your photo library.

In fact, there really only has been one thing that has held us back from really diving into Durak. Like most multiplayer card games, the real fun and challenge tends to come in playing against other people. While Durak does offer local Wi-Fi play, if you don’t happen to have iPhone wielding friends nearby willing to play against you, you are left playing against the computer.

Lost Token has let us know they are about to address this and open the game up to worldwide players with an imminent online multiplayer update. The update will feature both online and Bluetooth multiplayer, Facebook integration, buddy lists, and push notifications. Here’s a teaser video showing the online feature:

So, if you’re looking for a great card game that’s well implemented on the iPhone, Durak is a safe bet, and the upcoming online multiplayer update should guarantee long term replayability.