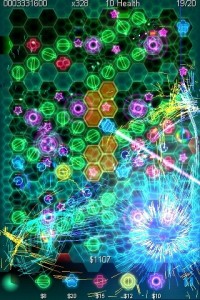 Critical Thought Games’ geoDefense Swarm has finally arrived in the App Store [$0.99]. We previewed the game back in August and loved it.

Fans of the original will no doubt love geoDefense Swarm. It has the same excellent Geometry Wars-inspired graphics, massive particle effect explosions, and (at higher difficulty levels) will test the skill of even veterans of the tower defense genre. In my time with the game there has been many times where I’ve lost levels (or been close to losing) and just turned my phone off, decided I was finished with the game… and then five minutes later would be playing again. How much geoDefense Swarm has me coming back to it, even after punching me in the face with creeps, really is an excellent benchmark for how good the game is.

While some of the tower placements were obvious in the original, the sequel leaves you with wide open maps and many decisions to be made. Towers can be built on a hex grid which is constructed of several types of terrain. For instance, some hex tiles you can’t build on but creeps can move through, and some tiles speed creeps or even heal them. The amount of variety in each level really tests your tower defending skill and how well you can utilize the included towers to survive. A strategy you discovered in a previous level can be rendered completely ineffective thanks to the next level’s hex grid layout.

The game has 30 levels, 6 tower types with 7 levels each. geoDefense Swarm is available for only $0.99.