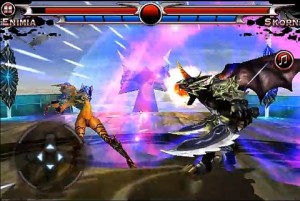 We promised to report back once we had more time with Blades of Fury [App Store], Gameloft’s newly-released fighting game. We’re happy to report, that against all odds, the virtual D-Pad and on-screen controls actually do allow you to pull off some pretty impressive combos filled with special attacks and suprisingly don’t seem to hamper the gameplay at all.

The Blades of Fury thread on our forums is filled with people echoing the same uncanny impressions regarding the controls. I’m really not sure what kind of new virtual D-Pad technology Gameloft has pulled out of their R&D department, but between Blades of Fury and Modern Combat: Sandstorm [$6.99] I’m beginning to become a believer in virtual controls.

The buttons on the bottom right of the screen control your attacks and defenses, you have two types of standard attacks as well as blocking and your special magical attack. Blades of Fury has a cool blocking mechanic in that you can’t just keep the block button held down all the time as there is a limited number of times you can block before your armor breaks. The magic attack system is equally cool, and works off a blue meter below your health bar that seems to fill up whenever you take damage or hit your opponent. 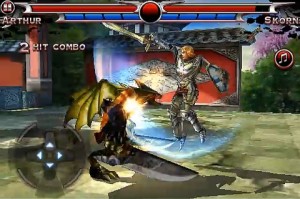 Each character has a fairly large variety of moves and combos, accessible through the pause screen attack list button and easily perfected in the included practice mode. I didn’t have any problem going through the list of moves and memorizing a few combos, which again I found to be very surprising for a game with virtual controls.

There are five difficulty options, ranging from “easy" to “hardest", so players of all skill levels should be able to find some challenge in the game. Easy mode is easy enough that you can win by rolling your iPhone across your face and the hardest mode is just ridiculous. I figured I would give it a try just for the sake of having some frame of reference for the different difficulty settings, and found myself falling victim to these amazing combos unleashed by the AI opponent that had my character juggling through the air powerless to do anything more than get a few hits in before meeting an untimely demise.

If you happen to find yourself administering one of these insane opponent juggling combos, you can also save replays of complete fights. There doesn’t seem to be a way to share these replays, but just having the option of recording them is nice. Included in Blades of Fury are many references to their online service Gameloft Live , but no one has been able to successfully log on. There are some statistics in the player profile area of the main menu that detail rankings which I assume have something to do with the currently inaccessible Gameloft Live integration.

The graphics in Blades of Fury are great, and the ten different levels in the game are equally awesome. Each fighter has their own arena ranging from evil looking catacombs to even flying on the back of a giant dragon. Similar to most fighting games, the story is lackluster and the voice work can be laughable at times. 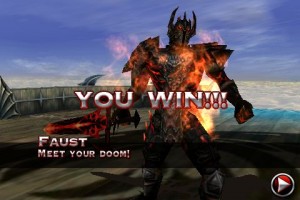 If you’re a fan of fighting games, Blades of Fury is worth some serious consideration. Gameloft has been on a roll lately both releasing and previewing games that have raised the bar of what to expect on the iPhone, and Blades of Fury fits in great with the rest of their current and upcoming lineup. If you know someone locally who also has the game, you can play over WiFi or bluetooth, a feature I’ve been unable to test.

But don’t just take my word for it, the thread on our forums is filled with people echoing my sentiments. Ayjona, Nizy, Squarezero and several others have also posted detailed accounts of their experiences with the game.