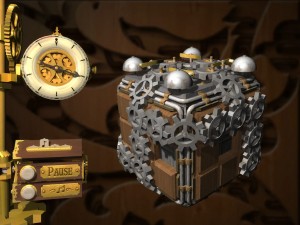 Cogs is a game that takes unique spin on the Pipe Mania formula for the PC currently available via Steam and Direct2Drive. In the game, players move around pipes and gears to transfer either rotational or steam power from one side of the game board to the other. The twist is, instead of simple 2D game fields, Cogs has you solving puzzles on a 3D cube.

Forum member Owl emailed the developers asking about a potential iPhone port of the game, and sure enough, it’s already in the works, but may be a while before the game gets to market. Check out this trailer for the PC version of the game to get an idea of what could be coming. Make sure you watch at least to the 35 second mark or so, as that’s when the video gets really cool.

Nothing in the trailer looks like it would be a problem for the iPhone. Some of the fancy lighting might need to get cut, but overall the core gameplay elements should work fine. Pieces could be controlled using single finger movements on screen, and the view controls could easily be done with two finger gestures. Cogs has a free demo available for the PC on their web site, so in the meantime you could either check that out or come participate in the thread on our forums. While Cogs currently has no release date, it’s at least nice knowing that it’s coming.