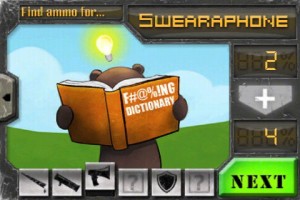 Imagine a world in which you are caught behind enemy lines, and your only hope is to take out an endless onslaught of pink bears whose only wish is to hug you to death. Welcome to Battle Bears.

Battle Bears [$0.99] is a survival shooter with a ridiculous story line that is almost worth the price of entry by itself. The full version of the game offers both Story and Survival modes in which you must survive the onslaught of pink bears with your machine gun or a number of unlockable weapons (including the Swearaphone pictured above which stuns the innocent bears temporarily as you shout out expletives). The gameplay itself places you behind a bunker in which you pan across the screen with one finger while tapping to fire with the other. Headshots take out the bears who release a burst of rainbow colors rather than blood.

Check out the gameplay video of the Lite version to see the excellent intro cutscene and basics of gameplay. The full version has a new cut scene between each of the 5 stages and a more gradual ramp up in difficulty in story mode.

The gameplay is simple and a bit repetitive, so it’s hard to say we necessarily recommend it as a game, but with this kind of epic story line, it’s hard to resist. But do at least take the Free version for a spin if you want a good laugh. There’s further discussion in our forums.