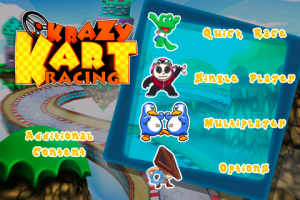 After a cool teaser video and a load of screenshots, Konami’s Krazy Kart Racing [App Store] has been high on my list of games I really wanted to play. As of tonight, the wait is (almost) over, and Krazy Kart is actually surprisingly fun, especially when playing against friends in the various online multiplayer modes.

Konami has tried pretty hard to duplicate as much of Mario Kart as they can, with shells replaced with missiles, mushrooms replaced with a generic speed boost item, the lightning bolt replaced with an item that turns everyone in to pigs, and other fairly blatant copies of Mario Kart power-ups. Instead of the highly recognizable Nintendo lineup or characters, Krazy Kart Racing features a slightly more obscure cast of Konami characters such as Sparkster (from the SNES game of the same name), Robbie Rabbit (the mascot from an amusement park found in Silent Hill), and the frog from Frogger along with seven others. 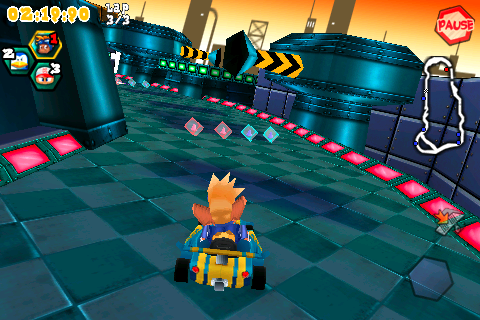 The controls work well and feature both tilt steering and touch controls. I’ve found myself preferring touch controls, but tilt worked fine as well. Acceleration is handled automatically, and there are virtual buttons on screen to brake and use whatever power-up you’ve managed to pick up.

16 tracks are included, based on themes of the games the characters are from. For instance, Power Stadium is a baseball diamond shaped track to go along with the baseball player racer from Power Touch Pros and there’s a Antarctic themed track to go with the penguin racer from Penguin Adventure. These tracks can be played in grand prix, time attack, and free run modes as well as with friends or random people online in the included internet multiplayer modes. 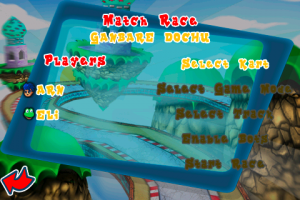 Online multiplayer works without any kind of registration. You simply enter your name, connect to one of the game servers, and from there you can either create or join a game room with other players. Any track that you have unlocked in single player is playable online with up to five other players and/or bots. Aside from the standard race mode, there are two battle modes, chicken and bomb chaser. In chicken, players accelerate down a straight track and slam on their brakes before reaching the end and flying off in to the pool of water below.

In bomb chaser, one player has the bomb and drives around a circular arena attempting to run in to other players to give them the bomb. Whoever has the bomb drives significantly faster than the other players, so it can get kind of hectic at times, but neither battle mode is very interesting and pales in comparison to Mario Kart. Performance online is surprisingly good, although there was a bit of lag when playing in a full game with bots, it was still completely playable. The online system seems a bit buggy still as I experienced a few instances where games wouldn’t launch, game rooms becoming unresponsive and it not releasing my username. Once you’re actually connected, however, the gameplay seemed to work fine. We mostly tested on Wi-Fi though 3G worked as well.

Our early impressions of Krazy Kart Racing is that it’s a fun kart racer, and while it’s currently the closest thing to Mario Kart available on the App Store, it’s still hard to compare to the original. There already is a menu item in game for downloadable content, so it should be interesting to see what Konami has in store with that. If Krazy Kart‘s online community takes off, I could see myself spending a serious amount of time racing over the internet. We’ll spend some more time with this title this weekend, and we are still looking forward to Gameloft’s Shrek Kart which is due next month.

Note: Krazy Kart Racing is not currently available from the US App Store, but has appeared in international stores. With any luck it should appear for download in the US shortly, though there have been instances (such as Silent Hill) where the U.S. release lagged as long as a week after the international release.