PC, Mac, and iPhone developer MythPeople recently released their second match-3 game into the App Store with Dragon Portals. The follow up to the well received Azkend puzzler certainly meets and exceeds the quality we’ve come to expect from MythPeople when it comes to eye-catching visuals.

Dragon Portals‘ asian theme resonates nicely throughout the game from the Far East melodies and richly accented visual touches to the intriguing storyline and dragons on which the game played. The objective is to keep the dragons in the air for as long as possible until enough energy can open the dragon portal. This is accomplished through the power of match-3. A power gauge fills up as matches are made, and once filled up, the portal opens, thus clearing the level. Also, height flags show how fast the dragons are descending, and when matches are made, the dragons will increase in altitude. 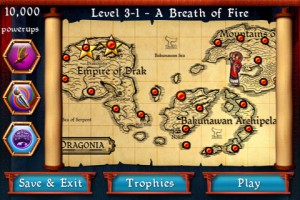 The game can be challenging and ratchets up pretty quickly by the time you’re on level 2. Unlike typical Match-3s, matching takes place by dropping orbs from one dragon to the next in order to line up three or more like-colored balls amounts. Not as easy when the game is in motion, but still fun nonetheless. As you earn more power ups, Story mode allows you to select up to three specific power ups to use on any given level. My main critique for the game is that it can be repetitious because while the objectives may change, the gameplay doesn’t. Having said that, Dragon Portals should be able to provide hours of playability given the degree of content and depth.

The iPhone version of the game currently offers two modes of play: Story and Survival and takes you through 80 levels of play. Progress within Story mode is illustrated on the map covering 8 islands while Survival allows you to choose the power up of choice and see how long they can keep dragons in the air with stars awards based on specific scoring milestones.

Dragon Portals has 10 power ups arranged in three categories: Destructive, Creative, and Passive. These power ups can help destroy similar colored orbs, clear out a line of orbs, and even highlight matches. If you’ve played Match-3s in the past, then these power ups will look familiar. In addition, as part of the achievement system, trophies can be earned for combos, chain reactions, and stars earned.

Dragon Portals is a solid game, and if you’re a die-hard Match-3 gamer, then this should certainly be a must have. The game is well-designed has very high production values and a worthy casual pick-up-and-play title.