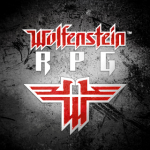 Originally inspired by the 1981 classic Castle Wolfenstein, id Software’s Wolfenstein 3D has seen many sequels, ports, spin-offs, and references in other games over the years since its original release in 1992. In its latest version brought to the App Store, Wolfenstein makes a small genre jump to Wolfenstein RPG [App Store]. I say a small jump because while technically being branded as an RPG, there remain a lot of first person shooter elements despite the removal of twitch-based gameplay in exchange for a much slower paced turn-based system.

Wolfenstein RPG was originally designed for J2ME devices which typically lacked the input methods required to control any kind of fast paced game, much less anything that required any precise aiming. Instead of things happening in real time, each movement or combat action you make counts as one turn. This not only makes Wolfenstein RPG much friendlier to the casual gaming audience, but also is the perfect game to play while you’re doing something else as even if you’re in the middle of a massive gun fight, the game is essentially on pause until you make your next action. 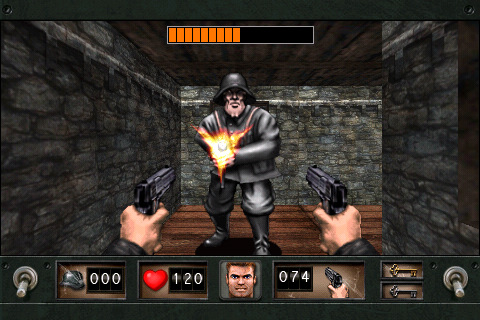 The controls couldn’t be more simple. Changing weapons can be done by tapping the weapon in the status bar along the bottom of the screen, and accessing and using items such as health packs is done through a menu that comes up after tapping your health on the same status bar. Movement is controlled using a large on-screen D-Pad and you can strafe by swiping in that direction on the screen. Tapping the screen attacks with whatever weapon you have equipped, including punching and kicking if you have your firsts or boot selected. Objects in the game such as switches and doors also sometimes can be activated by touching them.

Because there isn’t really any way to tell if whatever you’re standing in front of is interactive or not, I found that it’s usually best to have your boot equipped most of the time to save ammo since tapping on screen will always fire unless there is something else that can be activated. Other than that one issue, the controls work great. Turning right or left always turns 90 degrees, and moving any direction always moves the same amount. The game as a whole plays very similar to those ancient “3D" dungeon crawling games, which isn’t a bad thing at all as long as you’re not going into Wolfenstein RPG expecting the same fast-paced action as Wolfenstein 3D. 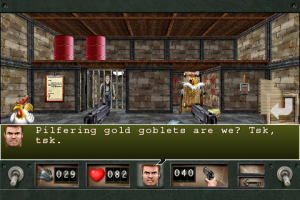 As expected, the game takes place in Castle Wolfenstein and you play as B.J. Blazkowicz just like in Wolfenstein 3D. Instead of the serious setting found in the original where you eventually take on Hitler himself after fighting your way through countless Nazis, Wolfenstein RPG comes with a much more tongue in cheek storyline where you slowly discover the wacky experiments taking place with soldiers, mutants, and even chickens. After escaping your cell, you make your way through the Castle Wolfenstein to put a stop to the weapons program that is creating all of these monsters. In the process, you uncover clues along the way through interrogating various scientists and reading clipboards on the wall. Wolfenstein RPG likely won’t be winning any awards for the plot, but it’s by far entertaining enough to keep you playing, especially if you appreciate games with a silly tone to them.

Wolfenstein purists should also be aware that all traces of the original Nazis and Hitler have been removed, and instead you’re fighting against the generic “Axis" army. I didn’t feel this detracted from the game at all, but it has been a point of contention among people in our forums.

Part of porting Wolfenstein RPG to the iPhone was a substantial upgrade to the sprites that are pasted on top of the 3D game world. Where the original game had vague brown blocky looking sprites for soldiers, the iPhone version has high resolution sprites which really stick out from the comparatively low resolution and polygon count 3D background, adding to the silly charm of the game.

Original J2ME game on the left, iPhone on the right, click for full resolution.

For a game with “RPG" in the title, Wolfenstein RPG is actually fairly light on the RPG elements. You do slowly level up as you play, but you have no control over any kind of character customization. Again, much like the goofy story, this doesn’t really detract from the game though you should just be aware that you’re not going to be getting the intense customization and role playing experience that you would usually expect with a game that has “RPG" in its name. Aside from the main quest, also included are two mini-games, Kick the Chicken and War. War is a guessing game of sorts, and it doesn’t take much imagination to guess what you do in Kick the Chicken. 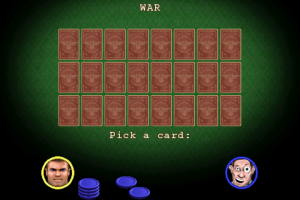 The only two problems I’ve come across that I felt need to be addressed are the lack of multiple game saves, and some minor graphical issues. While a single slot for saving your game may have been acceptable in a J2ME device, I find myself passing my iPhone around quite a bit with other iPhone owners as we check out each other’s games, and only having the options to continue an existing game or start a new one doesn’t work for me. In the graphical department, I’ve noticed a few bugs with the floor in Castle Wolfenstein and have experienced some texture tearing. Nothing game-stopping by any means but still worth mentioning as it did happen quite a few times.

The iTunes description claims that Wolfenstein RPG has 8+ hours of gamplay, but people on our forums largely seem to be finishing it in significantly less time than that. Regardless, Wolfenstein RPG is a fun re-imagining of the Wolfenstein universe that will likely really appeal to both retrophiles and casual gamers.

I’ve enjoyed myself playing through Wolfenstein RPG, and as long you’re not expecting something that the game is not, I believe most people will not only enjoy this game, but also anxiously await the arrival of Doom RPG. While the gameplay is fairly basic coming from its J2ME roots, you’ll find it to be a whole lot of fun.