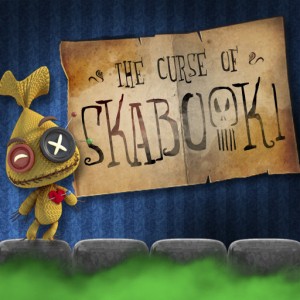 In scouring the App Store, it’s not out of the ordinary to come across games that have vague descriptions and a few screenshots that don’t give you much of an idea of what is actually going on in the game. I usually grab games like this because every once in a while you come across an otherwise undiscovered treasure. The Curse of Skabooki [App Store] just so happens to be one of those hidden gems.

Skabooki is absolutely dripping with atmosphere between the art and sound design, which is kind of odd for a puzzle game. Wrapped in a story that is slowly unlocked as you play through the game, it tells the tale of the lost voodoo doll, Skabooki. To save Skabooki, you need to clear blocks from the screen to make him fall down to the next level. Your little voodoo doll can only fall straight down, unless it lands on a block which has an arrow, in which case Skabooki walks in that direction. Also, blocks can only be cleared in sets of three or more. 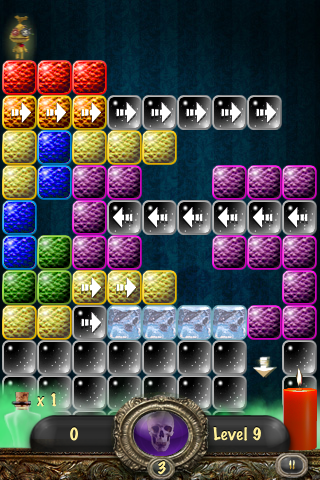 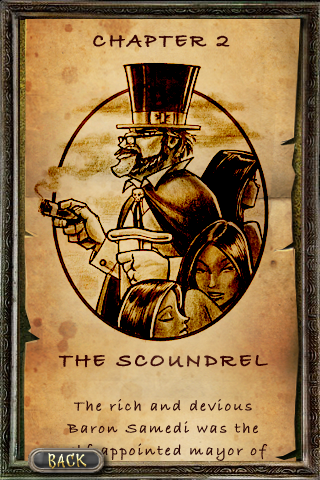 The game starts out fairly easy, but once you get in to the higher levels, you need to do a lot of planning to get Skabooki where he needs to go. Currently, 100 levels are included, but the game appears to have a built in level pack downloader, and the developer’s web site says updates will be free. Speaking of the developer’s web site, you really should check it out as it features both a gameplay video and an animated Skabooki dancing on the App Store logo while you wait for the movie to load.

While there isn’t much innovation in simple block breaking puzzle games, the amount of effort that went in to both the original music and great art style really make Skabooki fun to play. With online leaderboard tracking scores (As of this writing only one person has made it to level 100?) and a variety of in-game achievements, Skabooki should have a decent amount of replay value between downloadable level packs.