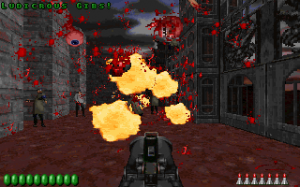 Mobila Interactive posted a brief video on YouTube tonight showing a very early build of Rise of the Triad for the iPhone. Originally developed by Apogee Software (now known as 3D Realms), Rise of the Triad was meant to serve as the sequel to Wolfenstein 3D.

With simple shoot everything that moves gameplay, it was released in 1995 and saw several re-releases before the source code was eventually released under the GNU General Public License. Since then fans have ported the game to nearly ever platform imaginable, and as of tonight the iPhone joins that list.

Here is the development video, also the developer notes the control scheme is just for testing and will be changed in the future:

For questions, or more information, head on over to the thread posted by the developer in our forums.