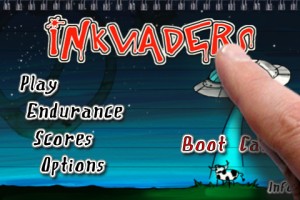 Chillingo has released screenshots of their upcoming Inkvaders game which bears a strong resemblance to Zombieville [App Store] and the many other similarly-styled shooters. The premise of this game explains the seemingly simple graphics and the title Inkvaders:

Whilst doodling away, half dazed from the boring lecture I was in, I thought I saw the image move. The Martians I was drawing were invading my notepad! I had to do something to stop them. Pen in hand, I drew a hero to fight them off. Bold, brave, no fear of death, the story unfolded before my eyes…

The game will come with 3 levels of difficulty, ammo management and various types of weapons including single shot weapons, multi-shot weapons, beam weapons, and rocket launchers. Both a Story mode (30 levels of 3 unique locations) and an Endurance mode is offered.

It’s hard to tell the quality of the game from screenshots alone, and these types of games depend greatly on gameplay feel and balance, so we’ll have to see how this one plays. 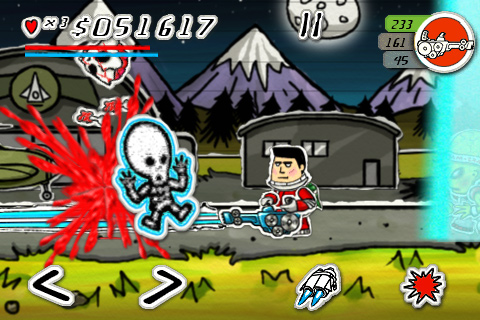 An extensive gallery of images is provided after the jump. The game is expected to be submitted in about two weeks.