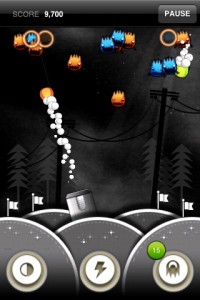 Last Cannon is a simple game with a single survival / highscore mode, but the color matching / elimination element takes it beyond just another simple shooter into the realm of a puzzle game that’s genuinely refreshing to play.

The original version’s difficulty ramped up pretty steeply, but the latest version improves the balance with weapon upgrades and a larger gameplay area that can extend your gameplay time.

The 1.3 version also addresses bug-fixes for 3GS owners and improves the tilt sensitivity. The following video is of the original 1.0 version:

If you’re looking for a simple stylistic shooter with some puzzle elements, Last Cannon is one to get. The game still seems to have a following in our forums.