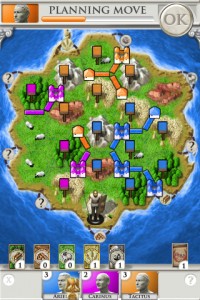 Any self respecting board game nerd has played Settlers of Catan and likely has a copy sitting on a shelf with at least one of the expansions. Kolonists [App Store] shrinks Catan in to the palm of your hand, combining the core gameplay experience with the iPhone touch interface.

Originally published in 1995, Settlers of Catan is often referred to as the “killer app" of board games both due to its overwhelming popularity and massive international appeal. Catan has sold over 15 million copies and has been translated to over 30 different languages as well as seeing different electronic versions of the game including browser-based applets, an XBOX Live! Arcade game, and now an iPhone game.

The basic idea behind Kolonists is you’re a band of settlers on an island and you build farms, villas, and roads to connect them while collecting resources to build even more or trade with other players. Everything you build awards influence points, hit 10 influence, and win the game. (Influence levels can also be changed to 12 or 14 to win in Kolonists.) This is a complete oversimplification of the game, as I’ve read web sites that consist of nothing but strategy discussion for winning Catan. 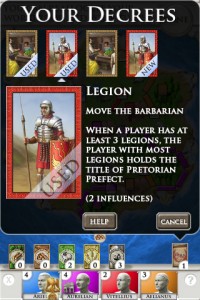 The game has an almost Tetris-like appeal to it in that you can learn how to play in a few seconds, but becoming a good player will take much longer. No two games are ever the same because the game board game consists of randomized hex tiles, so one strategy that worked well for you in a previous game may be rendered completely ineffective due to the resource layout of the next game.

The greatest disappointment in Kolonists is the lack of online multiplayer. Since 3.0 came out I’ve been waiting for great board games like this to all come packed with the ability to play asynchronous multiplayer with push notifications when it’s your turn. This functionality would take Kolonists to a whole new level, as the fun part of Catan always has been playing against other people, forming alliances, and eventually betraying those alliances.

There are also some odd rule changes in Kolonists, for instance there are no dice and instead of gathering resources from adjacent tiles, you gather from where you place your worker. This also restricts resource sharing since only one worker can be on a resource space at a time. Finally, there isn’t any negotiation to be had with the AI opponents. Your only options for resource trading are pure 3:1 or 4:3 trades to banks or ports. (Thanks, Mrbass.)

If you’re new to Settlers of Catan, check out the Wikipedia article for more in-depth rules. Kolonists is the best way to play on the iPhone, and it provides a pretty decent Catan experience. If multiplayer is your thing, I’d check out the free JSettlers java game, look in to the XBOX Live! Arcade game, or better yet, pick up the board game.