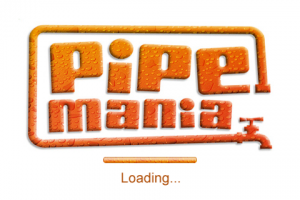 Pipe Mania [App Store] was originally developed by The Assembly Line in 1989 for the Amiga. Soon after, it was ported to various other platforms by LucasFilm Games (who called it Pipe Dream), and since then it’s appeared on nearly ever platform in existence. Whether you’ve played the original, a remake, or a mini-game inside another game based on the concept (such as the hacking drill in BioShock), Pipe Mania is a timeless classic and is said to be the most successful puzzle game ever created.

The basics of the game are simple, you need to construct a pipeline from the faucet to the drain. Initially, you construct this pipeline using the series of different straight pieces and elbows from the left side of the screen. Pieces can’t be rotated, so each must be placed intelligently on the game board to reach the goal. 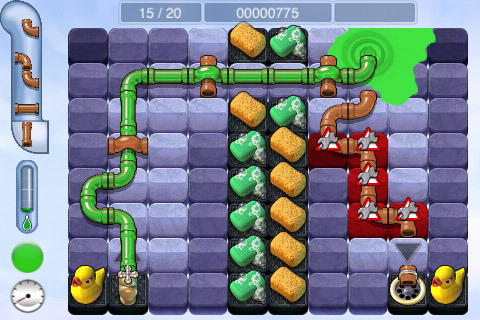 As the difficulty ramps up, you will be forced to build your pipeline utilizing existing pieces already built at the start of the level as well as building around obstacles in squares that you can’t place pipes on. If the next available piece is of no use to you, you can place it on the game board, out of the way, and if you misplace something you can build over it. Both of these actions subtract from your overall score, but are often necessary, especially in later levels. 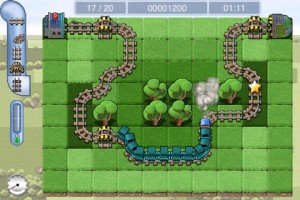 To add variety, this latest version of Pipe Mania (based on the 2008 PSP version) includes a colorfully animated introduction, complete with different characters seen throughout the game, along with slightly different tile sets for other areas of the game. For instance, once you complete laying pipes in the sewers, you progress to the railroad where you lay train tracks to connect two tunnels. Seven of these locales are playable in World mode, and as you earn trophies Arcade, Bonus, and Classic modes are unlocked.

Pipe Mania for the iPhone works very well with touch controls. Reinvented for the iPhone and other consoles, this latest iteration of Pipe Mania has the same core gameplay of the previous versions, but with graphical updates as well as a few other perks to increase replay value and add variety.

Here’s a gameplay video showing some of the early levels:

While there have been a number of Pipe Mania clones in the App Store, none seem to have the depth and finish of this official port of the original. Early reactions from our forum members have been very positive. The iPhone version is said to be almost an exact port of the 2008 PSP remake of the game. Those only familiar with the original version of Pipe Dream may take offense to portions of the 2008 remake as it adds a number of new elements to the game. Fortunately for old fans, there also appears to be a Classic mode that seems to preserve the original gameplay.

If you’ve never played a Pipe Mania game before, there is no better time than the present.