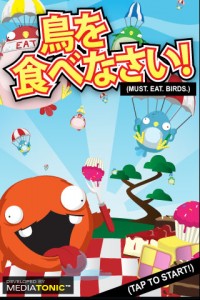 The main characters of Must.Eat.Birds. are the nomsters, who were enjoying a picnic of various desserts when a seemingly endless supply of parachuting birds launched their attack. The nomsters, left with no choice but to defend their precious supply of cupcakes and other goodies fashioned a makeshift defense using two forks and a rubber band.

To launch your counter-attack against the bird offensive,  draw back the nomster currently loaded in the fork slingshot and release in the direction you want to fire. Nomsters can eat each other to create bigger nomsters, capable of clearing more birds off the screen by launching another nomster in to the existing airborne nomster.

Scoring is largely based on combos, you will want to launch your nomsters to clear out the most birds with each attack. As your combo grows, a multi-layered cake appears in the background. If you’re able to score a large enough series of combos for it to reach the top, that’s when the magic happens: Maximum Bake, which powers up your nomsters, easily allowing you to easily defeat even more of the bird invaders. 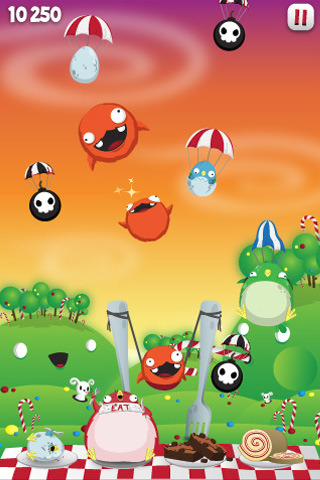 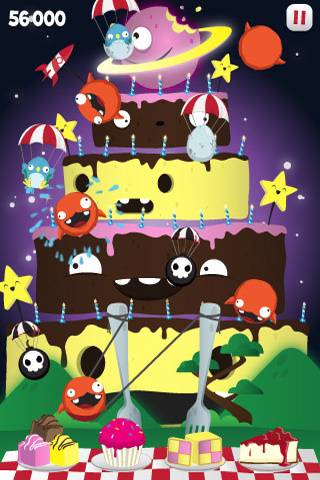 Must.Eat.Birds. comes packed with 9 mission levels of increasing difficulty with different type of birds that require more nomster hits before they can be eaten as the game progresses. Aside from that, there are also 4 unlockable challenge modes and an array of achievements to increase replay value.

If you find yourself looking at screenshots and watching the trailer trying to make sense of what is going on in the game, I don’t think you’re supposed to. The absurdity present in Must.Eat.Birds. between the concept behind the game, Maximum Bake, and everything in between is a large part of what makes Must.Eat.Birds. so great.

At 99¢, Must.Eat.Birds. is a simple and strange game that goes so far off the deep end that you can’t help but smile while playing it.

Update: There seems to be a stability issue for some. A restart will help and according to the developer an update/fix has been submitted.