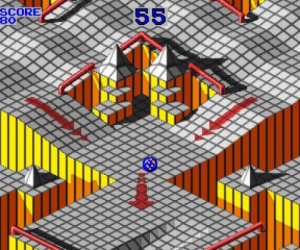 Yes, Marble Madness is coming to the iPhone.

Marble Madness was first published by Atari Games in 1984 and is the original ball rolling game that has always seemed to be a natural fit for the iPhone. The original game included 6 maze-like levels that you must complete before time runs out. Various objects and enemies stand in your way.

Over the years, Marble Madness has been ported to a variety of platforms, and at E3 we were able to spend some time with the iPhone version. Mobile developer Handheld Games has been working with Midway to bring Marble Madness to the App Store. This version of the game includes the 6 original levels along with some modernized tweaks and new look, but also contains a “Classic" mode that allows you to relive the old days.

We aren’t allowed to provide you any screenshots or video of the game just yet, but will do so as soon as we are given permission. Handheld Games also showed us a couple of their own games including Batting 1000 and Lock ‘n Load which we will feature in another article.