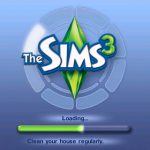 EA’s Sims is a series that needs no introduction. Between The Sims and its seven expansion packs to it’s sequel and the associated eight expansion packs (and The Sims 2 ten “Stuff" packs with additional furniture and accessories), The Sims 3 [App Store] has a lot to live up to.

Naturally, the game begins with the creation of your Sim. Veterans of The Sims games may be slightly disappointed by the limited options while customizing your character as you’re limited to sex, hair, eyes, shirt, pants, and shoes along with color selection for each. Personality choices are also fairly restricted.  And while the trait selection gets the job done, it left me wanting more. Unfortunately (and somewhat expected with the iPhone version), this theme of not having as many options as you may be used to from previous versions continues throughout The Sims 3.

Immediately after finalizing your choices for your character, a brief tutorial walks you through the basics of the game and how to keep your Sim satisfied. Sims have the same basic needs you’re used to, between needing to eat, sleep, bathe and go to the bathroom as well as a goals and wishes. The goals pop up randomly, and act like mini objectives for what to do in the game. While I haven’t yet had the chance to get particularly deep into the game, the goals I’ve come across so far seem easy to satisfy and include things like catching a fish or going shopping. 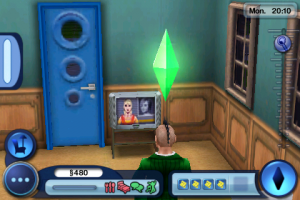 The controls take some getting used to, mostly due to the inherent inaccuracies in trading a mouse pointer for a fat finger. Like in previous games, most items in your house have actions associated with them. Tapping a person gives you the option to talk to them in various ways, but often when you mean to select something without zooming-in first, you select something else. This becomes particularly annoying while visiting someone’s house who has a lot of furniture and you keep selecting the lamp instead of the person you’re trying to talk to.

Because of this, camera control is vital to selecting anything. The camera can be moved by dragging a single finger, and moving the camera up or down, as well as rotation and zoom, are all done through two finger gestures. It works, but because of so many things attached to a two finger gesture, it takes a while to get the hang of it. 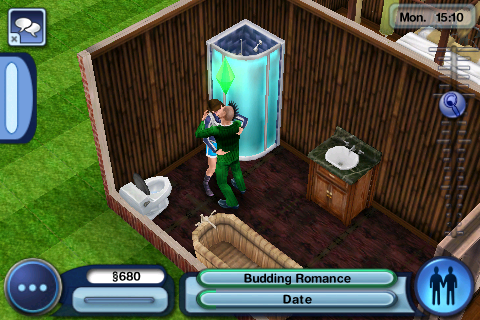 The performance on my iPhone 3G is average. The Sims 3 doesn’t run at a particularly high framerate, nor is it jerky to the point of being unplayable.

The biggest letdown — and again, somewhat expected for a $9.99 iPhone game — is the lack of a real build mode. If what you enjoyed about The Sims series is building your house, you’ll be disappointed to find that your options are limited to buying and selling furniture, along with moving and rotating it. Once you save enough money, you can upgrade to a bigger house, but the floor plans cannot be changed. 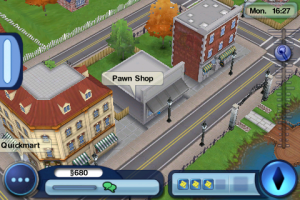 At the end of the day, The Sims 3 is a decent downsized port that likely has enough content to keep fans of the series satisfied. It comes loaded with the same quirky AI seen in the previous games, and most of the social options when talking to NPC’s seem to have remained intact. Whether or not I’d recommend The Sims 3 largely depends on what you liked out of The Sims games.

The Sims 3 is an extremely ambitious game for the iPhone, even with the limitations it has, but if you’re like me, and really enjoyed building elaborate houses, you’ll probably want to take a pass. If what you spent the most time doing was cultivating virtual relationships between your Sim and the other Sims in your neighborhood, you’ll find yourself right at home once you get the hang of the controls.