Rake in the Grass, the developers of the highly rated Archibald’s Adventures, has released their second game into the App Store: Westbang [App Store].

Westbang is a reaction tap-shooter in which you have become sheriff of a small town and your job is to take out the bandits. But, don’t just dismiss the game as just another tap-shooter, as Westbang successfully manages to leverage its simple mechanic into a very enjoyable game.

The game offers 25 different levels set to a storyline of you as sherrif. The goal is to survive as long as possible shooting bandits while avoiding innocent bystanders. 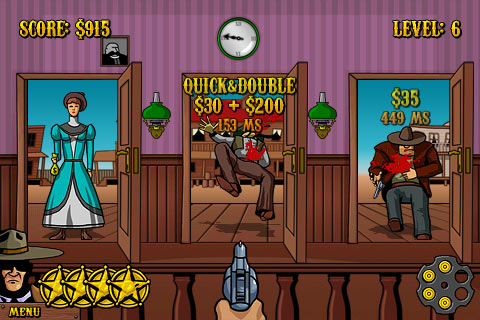 Armed with a six-shooter, doors will swing open randomly revealing either bandits or bystanders. Shoot the bandits and avoid the bystanders. You’re allowed 5 mistakes before the game ends and your final score is tallied. Complexity is added with the need to manually reload and properly identify your targets. You can’t just shoot bandits arbitrarily, however… as sheriff you must wait until they draw their weapons before firing. Wait too long, and they’ll get you first.

Later levels add bandits that will draw their weapons after different periods of time, and some may or may not draw a weapon at all. These constant changes in gameplay elements manage to keep you interested and wanting to try “just one more time" (like all good games).

The developer’s video shows the first level which is rather easy:

At only $0.99, we recommend Westbang for anyone looking for a fun and casual gaming experience.