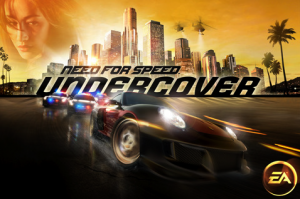 It was a long time coming, but the greatest iPhone racer of them all has arrived in the App Store.

We first caught wind of an iPhone installment of EA’s highly popular and long-running racing franchise back in August, and after several delays, Need For Speed Undercover [App Store] has finally arrived.  Was it worth the wait?  Most definitely.  Let’s take a look.

NFS Undercover, in keeping with much of the franchise, is a mission-based racer, as opposed to the ’round-the-track variety.  As the title might suggest, you play the role of an undercover wheel man infiltrating a series of street racer / chop-shop gangs to try and bust an auto theft ring wide open.  Your point person is a seductive get-the-job-done savvy operative who guides you from mission to mission and gang to gang.  And the key to it all?  Own the road, screw with the cops, and just generally cause mayhem to build street cred. 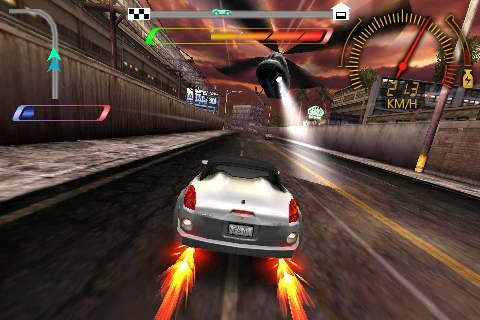 Getting the job done involves taking part in various types of street confrontations, including Circuit Races, Highway Battle, Cop Takeout, and Sprint — there’re eight in all.  Sometimes the only objective is to cause as much public property damage as possible in the course of a run.  And that, I can tell you, is a whole lot of fun.

Your weapons of choice are many: Ponitac Firebird, Porsche Carrera GT, Nissan Z34, Lamborghini Gallardo, Pagani Zonda F, and many more.  Each have their own distinct characteristics and can be purchased, along with handling, speed, nitro upgrades, and the like, with cash won from various street competitions.  It’s rough out on the mean streets, but there’s cash to be won — and lots of it. 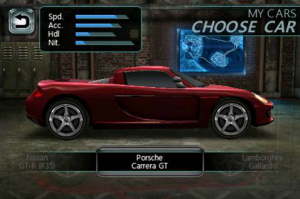 The game features fairly obvious controls that work quite well.  Your car accelerates from stop to maximum speed automatically, so there’s no accelerator to speak of.  Tap the screen to brake.  Swipe upwards to engage nitro boost.  Swipe downwards to enter a slow-motion mode that lasts but a short period but can be of considerable help when barreling through a busy intersection under the glow of a red light.

Graphically the game is superb.  It takes me back to the first time I saw Gran Turismo on the original Playstation (though NFS Undercover looks much nicer) and found it hard to believe what I was seeing onscreen.  The quality, animation flow, and overall “tightness" of the graphics are truly far more suggestive of a PSP title than an App Store release.  (We’re finally getting there!)  The menu system and effects are top notch, as well.  The car models, with reflective windshields and paint jobs, whizzing through the game’s various high quality environments, are highly realistic and really give the game a top-notch feel.  And that’s not to mention the big-studio caliber sound effects and music tracks.  It’s polished, tight, and clean — an iPhone dream title, in short. 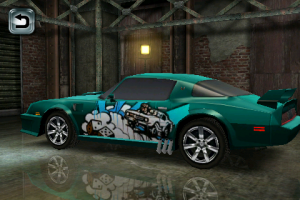 In the area of complaints, I can’t really offer much, though a few roll-your-eyes moments do arise from the game’s live action cut-scenes.  The drama is laid on pretty thick and, after a while, it just becomes amusing to watch those actors seriously fume about the street battleground scenarios.  But it’s nothing so bad as to warrant a dodge of the title.

Need for Speed Undercover is easily the best iPhone racer in the App Store and one of the best iPhone titles — period.  In digging into the game for this review, I spent a notable amount of time playing on my daily commute to and from the office.  I received three separate comments from fellow commuters regarding the visuals dancing across my iPhone’s screen.  “That’s not an iPhone is it?!"  And, really, it’s no wonder.  This is a game that every racing fan needs to own and is well worth the price of admission.

EA really knocked one out of the park with Need For Speed Undercover.  A title definitely worth the wait.