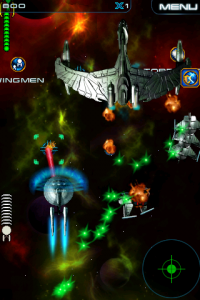 Star Trek [App Store] is the latest movie to use a game as a marketing tool, and upfront, if you’re a Trekkie, this will appeal to you right away. If you’re not, then there are probably better top-down shooters in the world of iTunes.

For a Trekkie, the game offers a fair amount of content and enjoyable gameplay, but the game also doesn’t offer anything groundbreaking that you haven’t seen with similar games. The basic premise is that Capt. Kirk and his crew must destroy enemies of the Federation and do so in enemy space on board of the U.S.S. Enterprise.

Star Trek has two modes: Campaign and Quick Play. In Campaign mode, there are 12 missions where you battle the 3 major races: Klingons, Cardassians, and Romulans. You’ll need to defeat the Klingons and defeat the boss before proceeding to the Cardassians and finally the Romulans. A map is provided that tracks your progress objectives.

The game provides three types of controls for the Enterprise: accelerometer, touch, and virtual joystick. All of them are responsive, but touch makes maneuvering the Enterprise through tight spots easier (e.g. asteroid fields and weapons fire). The game offers two levels of difficulty: Normal and Hard. Auto-fire is set by default, and when turned off, you tap the screen to fire in accelerometer and touch control modes or use a fire button if using the virtual joystick controls. 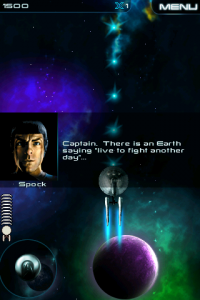 Star Trek also offers an upgrade system awarding stars for completed missions, which can then use to upgrade shields, phasers, torpedoes, and tractor beam. In addition to the upgrades, there is an Achievement and Medal system as well as Power Ups. Dialog boxes featuring depictions of the various crew that you know and love such as Kirk, Uhura and Spock appear with advice and more often than not, half useful comments.

The gameplay is similar to any type of top-down shooter that many of us have experienced. You spend as much time weaving in and out of weapons fire and other tight spots as you do shooting enemies. During the game, power ups and enemies appear from the wreckage of enemy ships that the tractor beam will pull towards the Enterprise. Wreckage from destroyed enemy can actually destroy other enemies that come in contact with it, and the tractor beam can be used to move wreckage anywhere on the screen (a medal is actually awarded for destroying enemies this way). The backgrounds are beautifully rendered for each of the races and worlds, and the gameplay is engaging. I like shooter-type games, and felt at home with Star Trek. The boss fights can be entertaining and frankly, they can be the toughest part of the game.

So, if you’re a Trekkie, Star Trek is well packaged and exudes the Star Trek aura. It also offers a bit more content than you would typically find in a game with movie tie-in. But, if you were to remove the Star Trek brand name, you’d be left with a good but rather unexceptional vertical shooter.