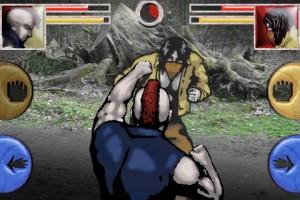 Play Jed, a local punk who wants a peaceful life for his family, as he rids his local parks of the gangs that have claimed them as their own.

The $0.99 fighting game offers simple controls (2 dodging, 2 punching) but can be combined for different attacks. See the strategy guide for more info. The game offers 4 gangs/opponents, each having their own speed of attack and 4 ranks of increasing difficulty.

The game is, of course, being discussed in our forums with some first impressions offered. Congrats wastedyuthe!