First Star Software and Chillingo have released the first screenshots of Boulder Dash for the iPhone. This classic game includes all 80 levels of the original as well as 4 additional bonus levels. 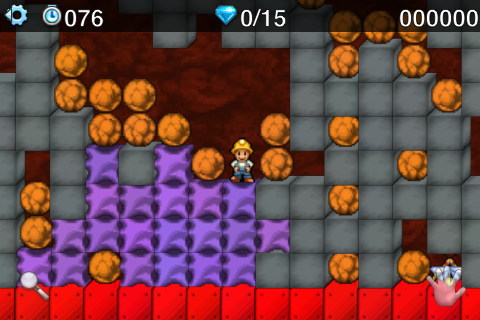 We were big fans of the 1984 original title, which I first played on an Apple //c. First Star Software has re-engineered Boulder Dash for the iPhone and iPod Touch to make use of “multi-touch; ‘pinch’ zoom; the ability to switch between portrait and landscape modes on the fly".

The major hurdle for this game to make it to the iPhone is one of controls. Past iPhone Boulder Dash clones have failed to successfully make this transition. In the original version, quick joystick control was required to navigate some of the more complicated mazes. First Star Software has chosen to go with a variety of control options to accommodate different players.

There are two virtual pad controls and one swipe control. Virtual control pads offer the up/down/left/right buttons in a standard plus-sign configuration (screenshot) or divided (screenshot) into separate up/down or left/right controls. Meanwhile, the swipe controls allow you to swipe anywhere in the direction you want to go. Swiping and holding allows you to continue moving in that direction.

As shown in the screenshots below, the game offers both portrait and landscape configurations by turning your iPhone as well as different zoom levels through pinch gestures. We’ve been given a preview copy of the game and found the virtual pad controls to be surprisingly functional — allaying one of our biggest fears for this port. Many other iPhone ports have suffered from poor virtual button mapping resulting in a poor experience. We’ll provide a much closer look at the game once the game is released (which should be soon).