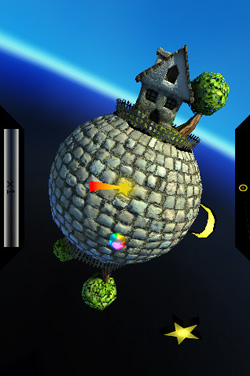 In the nine months since the App Store went online, over 35,000 applications have been written for the iPhone.  Of these, the single largest category is games.  Lots and lots of games…which, of course, means lots and lots of takes on the same formula.  Match-three is likely the most repeated type, but not far behind are the “snake" games.  They have a simple premise: you’re a snake.  Move about the playfield eating things, to grow in length, but don’t eat your tail or bump into obstacles.  I own a camera that has a built-in snake game — they’re everywhere.  And the only real difference between them is just how much prettier one is than the next.

And so, I was rather pleasantly surprised by French developer DigDog’s recent release, SnakeGalaxy [App Store], which puts a new spin on the snake game proposition.

In SnakeGalaxy, you are a snake, but in a departure from the standard formula, the playfield is a 3D planet.  You must slither about its surface (as the planet rotates beneath you) collecting food rations and super food rations to accumulate points and increase the score multiplier.  Each time a ration is collected, your speed and length increase, the score multiplier increments by one, and a timer starts to dwindle.  Collect rations fast enough and the multiplier will increase, but if time runs out, it returns to 1x.  Oh — and don’t eat your tail.

The game features five different planets, each well rendered and of a different theme, and with a different set of challenges.  On the Village planet, you must avoid wooden fences while traversing its cobblestone surface.  On the Jeans planet, avoid buttons and rivets while slithering across its denim surface.  On the Graphik planet, your tail is the only enemy, etc.  A Mission mode lets you choose any unlocked planet and play from there to the next planet, and so forth, while a Quick Play mode sets you on the most recently unlocked planet to go for the highest score.

The game is best played with two thumbs.  Upon touching an area of the screen, the snake will head in that direction.  It takes a little getting used to, as a tap to the left or right of the screen is not a “turn in this direction until I let up" control, but simply a turn to the area of the tap — no further.  After a number of hours with the game, however, it becomes much more natural, in my experience.

I confess that, upon seeing this title appear in the App Store — another snake title — my heart did not go pitter-pat.  But after downloading it and spending considerable time with the game, I find it to be the most unique snake game I’ve come across.  It’s enjoyable and even charming, with lovely graphics.  If you need just one snake game on your iPhone or iPod touch, it should be SnakeGalaxy.  And at it’s limited introductory price of $.99, it’s a solid buy (regularly $2.99).

See our gameplay video for a look at the first three planets.