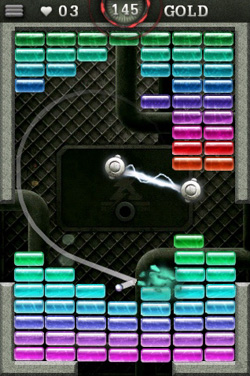 Trileet Inc has released their first iPhone game into the App Store. Reflexion [App Store] is a fresh take on the brick breaker formula with an iPhone twist.

At first glance, the game seems to be a standard Arkanoid/Brick Breaker game but it’s quickly apparent there’s something different going on. The game begins with a rather standard grid of bricks that must be destroyed. Instead of a moving paddle along the bottom, however, you are allowed to simply “draw" the paddle in any location on the screen with a simple swipe.

While it would seem that this mechanic would make the game easier, it actually introduces a level of complexity that wasn’t immediately obvious. Suddenly, areas on the sides of the screen can become out-of-bound areas which require quick reaction times. The game comes with standard power-ups (fast ball, power ball, long paddle) but also some unique ones such as multiple-paddles.

In order to compensate for the increased complexity, the developers have also included a slow-motion mode that is invoked by shaking the iPhone (or tapping a button on the top of the screen).

The game comes with 50 levels including a “puzzle" mode that offers more intricate and difficult levels that must be completed within 3 lives.

We recommend taking a look at this gameplay video:

Of note, there seems to be a device specific bug that is causing crashes on some 2nd Generation iPod Touches, so if you own one of those devices, you should probably wait for the fix which is being worked on. Meanwhile, the game has been solid on our iPhone 3G.

Overall, the game is a refreshing and challenging take on Arkanoid and is easy to recommend.