Legendary programmer Steve Capps, well known for authoring the Macintosh Finder and his work on the Newton OS, has released AliceX [App Store] an iPhone version of the first Macintosh game, Alice or Through the Looking Glass. 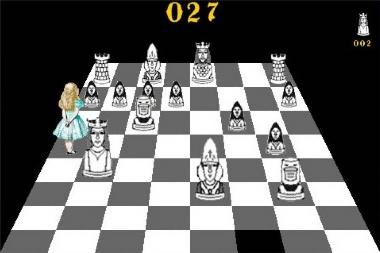 In honor of the 25th anniversary of the Macintosh, Steve Capps wrote a new game inspired by Through the Looking Glass. Relive the early days of Mac and discover what happens when Alice falls onto a chessboard. 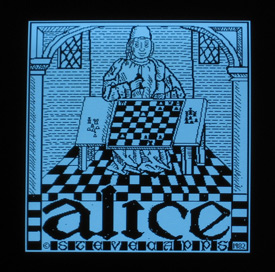 The screen turned black and then, after a few seconds delay, a three dimensional chess board in exaggerated perspective filled most of the screen. On the rear side of the board was a set of small, white chess pieces, in their standard positions. Suddenly, pieces started jumping into the air, in long, slow parabolic arcs, growing larger as they got closer.

Soon there was one specimen of each type of piece, all rather humanoid looking except for the tower-like rook, lined up on the front rank of the board, waiting for the player to click on one to start the game. The player would be able to move like the piece they chose, so it was prudent to click on the queen, at least at first.

The pieces jumped back to their natural positions on the far side of the board, and an image of a young girl in an old fashioned dress floated down to the front row, which represented Alice from Lewis Carroll’s “Alice in Wonderland" and “Through the Looking Glass" books, drawn in the style of the classic John Tenniel illustrations. The player controlled Alice and viewed the board from her perspective, facing away from the player so you only saw her from the rear.

Likely, few of our readers have spent time with Alice and we’re glad to see new life breathed into this rare and unique game.  A free, “lite" Javacsript version can be played on the game’s homepage.