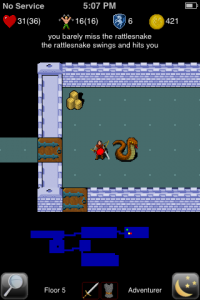 iPhone gamers who enjoy a solid dungeon crawler will be pleased to hear that ChronoSoft has just released its ground-up iPhone remake of Rogue—Rogue Touch [link]–throught the iTunes App Store.

Rogue Touch is a remake of the original Rogue written from scratch to support the iPhone’s touch and graphic abilities, it should keep anyone who likes dungeon crawlers going for many hours! Can you make it through 26 floors of randomly generated dungeon to retrieve the Amulet of Yendor and then climb back to the surface?

Rogue Touch is a remake of Rogue featuring a graphical tileset that appears to be an enhanced version of the visuals from the lovely Atari ST version (the best version out there in my opinion).  Various animations have been added that were not present in the original, as well: weapons effects, a teleportation effect, stair descent, etc.

The original Rogue had only one goal… to retrieve the Amulet of Yendor. That is your current mission in Rogue Touch as well, but there could be additional missions in the future (we’re not ready to discuss that yet). The dungeons themselves are randomly generated and magic is randomized upon each new game’s start (meaning that red potion that healed you in the previous game may actually be poison in the next one you start).

You might have been able to see from the video, there are several types of equipment: Weapons, Armor, Potions, Scrolls, Wands/Staves, Rings, Food, and your ultimate goal, the Amulet. There are many types of item in each category, and we’ve added in some new equipment not seen in the original Rogue games. We plan to introduce even more new magical items in each category with each future update. 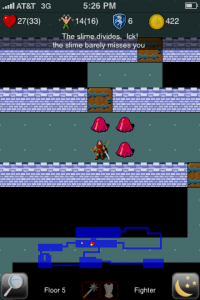 Rogue Touch places your sparcely equipped avatar on level 1 of the Dungeons of Doom.  As you crawl the dungeons, battling a vast horde of ghoulish creatures, you will find and collect weapons, armour, potions, and scrolls to help you in your daunting mission.  Deeper and deeper you progress until you reach level 26 where the Amulet awaits.  But, then…most never see level 26…

Rogue Touch features touchscreen controls with an eight-direction rose overlaying the screen.  The player is centered on the iPhone’s display and an outward tap in any direction moves the character in the indicated direction.  A sustained touch “runs" the character in the chosen direction.  A tap to the avatar in the center of the screen brings up an equip menu that allows management of items picked up along the way.  The controls are simple and work fairly well. 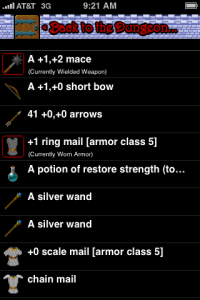 To aid in navigation through the corridors of each level, a small, semi-translucent on-screen dungeon map overlays the game screen.  What’s more, the main display features pinch zoom in / out functionality to help keep the dungeon in view.  An ambient “dungeon sounds" audio track helps set the mood–drafts of wind, dripping water, skittering creatures, etc.  The developer indicates that a variety of combat noises are planned for a future release.  (The original Rogue has no sound.)

In my pre-iPhone days, my Apple mobile device was the Newton, and my favorite Newton game was NewtHack.  Rogue Touch is leaps and bounds beyond NewtHack.  In fact, it’s the best rendition of Rogue in the App Store. 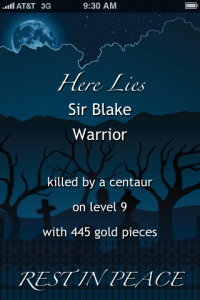 Now, those who’ve been paying attention are perhaps aware that there’s only one other version of Rogue available in the App Store: Rogue [App Store] from Gandreas Software, which is free.  (We reviewed the game back in November.)  Is Rogue Touch sufficiently superior to Gandreas’ Rogue that it’s worth the $2.99 asking price vs. the free alternative?  To fans of the genre: yes.  Rogue Touch delivers “that Rogue feeling" more faithfully than Gandreas’ offering.  Add to this the fact that several bugs have been noted in the latter title and not addressed since its November release, and Rogue Touch stands out as the recommended iPhone Rogue incarnation.

Gamers wondering whether or not Rogue is their cup of tea may want to check out one of the many free PC / Mac roguelikes to get a feel for the  game before making the Rogue Touch leap.  But for true dungeon crawler fans out there, I call Rogue Touch a no-brainer.

The game is being actively discussed in our forums where it has been well received by our readers.