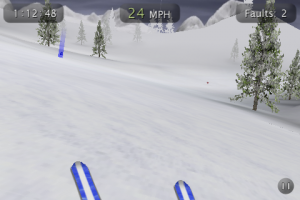 Touch Ski 3D makes use of the iPhone’s multitouch capabilities by providing individual ski control — one finger per ski.  When the skis are held parallel (about one inch apart), the score counter glows green and it’s full speed down the slope, but when they’re held either together or apart, travel down the mountain slows.

Touch Ski 3D is really two games in one.  A Race mode challenges the player to complete a downhill slalom course in the best time possible, darting to-and-fro amongst dual color markers that line the mountainside.  The game offers a surprisingly realistic “feel" (if skiing down a slope with two fingers can be called “realistic") with a nice lean / sway to the motion, thanks to the game’s well done physics and momentum system and high overall framerate.  There are 16 courses across four levels of difficulty in slalom mode, most of which are locked initially. 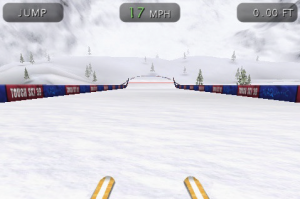 The game also features an online scoreboard as well as the ability to choose your preferred ski color for use in either game mode.

At $0.99, Touch Ski 3D is a good value, given it’s varied gameplay and solid overall feel.  I actually found it hard to put the game down in order to write this post (just one more run down the slopes…).  We do recommend that players experiment with a variety of different finger combinations to find the best fit.  (I find the index and middle finger of one hand to work very well, but have real trouble using two index fingers as shown in the video.)

See Naquatic’s game trailer for a look at the action.