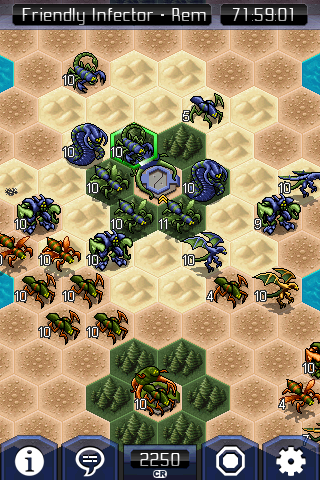 Another developer we met at GDC was Alexander Kral of Javaground, Inc.. JavaGround had been a mobile developer since 2001, but is now introducing their first original iPhone game in the coming weeks and offered us this exclusive preview.

UniWar is a turn-based strategy game that resembles Advance Wars. You command and build an army on a grid-map with the goal of controling all the bases and destroying your enemies. New units may be purchased with money that you’ve accumulated. As you learn the advantages of the terrain and your units, you can improve you gameplay to defeat your opponents.

The most interesting part of this game, however, is its implementation of multiplayer. The game offers an asynchronous online multiplayer option which allows you to play against people across the world at your leisure. (This is a similar system to Newtoy’s Chess with Friends [App Store]). In Uniwar, you can join up to 20 different games to play in parallel. When you make a move in one of your matches, it is sent up to the server and is transmitted to your opponent the next time they launch their game. This type of turn-based system frees you to play the game at your leisure.

Aside from online multiplayer, you can also play against the computer, against a friend on the same device or play a campaign mode with 20 missions.

UniWar is expected to be submitted to Apple later this week and should become available shortly after that. Pricing has not yet been announced.