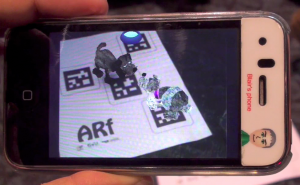 As a developer’s conference, GDC also attracts a number of game researchers such as Blair MacIntyre who is an Associate Professor at the School of Interactive Computing at Georgia Tech.

We met with Mr. MacIntyre about his research into Augmented Reality and how it might apply to the iPhone. The demos and possibilities he introduced were truly remarkable.

Augmented Reality is described as a combination of real-world and computer-generated data, where computer graphics objects are blended into real footage in real time.

He and his graduate students have put together some proof of concept demos on the iPhone which could pave the way to future gaming concepts.

This embedded video demonstrates a Augmented Reality Virtual Pet application on a current generation iPhone. The iPhone overlays an animated image of a dog on realtime video input from the iPhone’s camera. The result is a pet that appears to reside in the real world in front of you. MacIntyre then shows off a far more sophisticated Zombie shooter (what else?) using non-iPhone NVIDIA reference design platform.

The Zombie-shooter demo serves to show the more impressive possibilities of the technology. In the game, tapping on the screen shoots the zombies in your crosshairs. Moving the camera around and in/out changes your view and if you stay still too long, the zombies start throwing limbs at you.

MacIntyre reports that his research has found that those playing these Augmented Reality games with others were more social and interactive as compared to those playing more traditional games against each other.

More extensive demonstrations of the above concepts are provided in these videos: Augmented Virtual Reality Pet on iPhone, Augmented Reality Zombies on Tegra.

Some of MacIntyre’s students plan on taking these concepts and executing a true iPhone game based on the technology, especially if the rumors of a more powerful iPhone with advanced video processing capabilities are true. The next generation iPhone is rumored to be released as early as this summer.