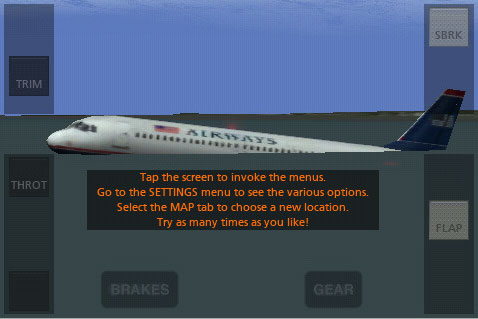 X-Plane developers Laminar Research have released an interesting new flight simulator app into the App Store. Called Sully’s Flight [App Store], the simulator takes you through the actual flight and crash landing of US Airways Flight 1549 on January 15th, 2009. That flight was disabled shortly after takeoff by a mid-air bird collision which resulted in both engines failing. Captain Chesley Sullenberger successfully crash landed the plane into the Hudson River with no loss of lives. He has widely been considered a hero for this feat.

Sully’s Flight places you in the cockpit of that exact flight and challenges you to successfully land the same plane under the same conditions.

Based on the popular flight-sim X-Plane, ‘Sully’s Flight’ starts you on runway 4 at LaGuardia in an Airbus A-320, at similar time, weather, and weight conditions to that fateful flight. YOU will fly the plane yourself, following hoops plotted in the sky showing Captain Sullenberger’s approximate ACTUAL flight-path…

X-Plane is a popular physics-based flight simulator for many platforms including the iPhone. This single-scenario simulation is available for $0.99.