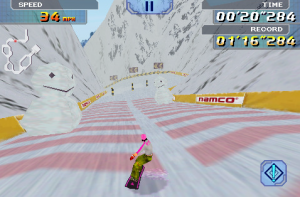 Earlier this week we pointed to a video preview of Namco’s then-upcoming Alpine Racer [App Store], a downhill ski / snowboard title that was described as “SSX-like." Since then the game has appeared in the App Store and, as a particular fan of SSX across several living room and mobile consoles, I must say that “SSX-like", Alpine Racer is not.

Oh, it’s not the worst ski / snowboard title I’ve encountered.  In fact, it’s likely the best such title in the App Store.  But I’ve played better ski / snowboard games on the (original) Playstation and Nintendo 64…and those are 14 year old consoles. 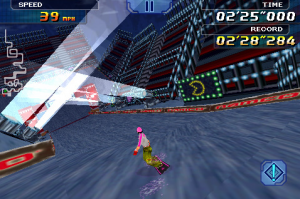 Alpine Racer brings the familiar (for such titles) Story Mode and Time Attack play modes.  The game’s options screen allows the player to choose between touch and tilt controls, both of which allow easy control of the onscreen character.  Gameplay involves racing solo, racing an opponent, or racing a “ghost" to the finish line.

The problem with Alpine Racer is that if feels like the port of a pre-existing mobile handset title that it is.  The game’s low polygon count combined with its low texture quality makes for a rather unimpressive downhill outing.  Not to mention the framerate issues (at least on the iPhone 3G, though the Namco 2G iPod touch video shows, unsurprisingly, smoother gameplay).  It just doesn’t “flow."

Hardcore fans of the genre may find appeal in Alpine Racer given the lack of other quality downhill options in the App Store, but any other sort of gamer will likely find the game rather lacking. You can try the game out for yourself with the limited (one race) Lite version [App Store]