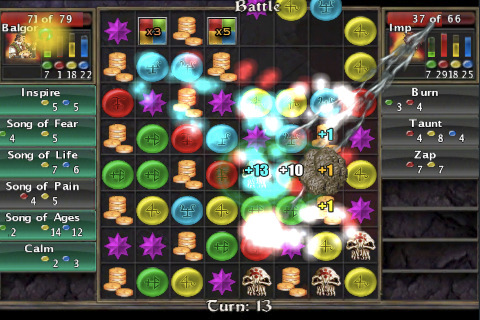 As promised, TransGaming has delivered the version 1.3 update to Puzzle Quest [App Store]. The new free upgrade offers continued graphics, sound and performance enhancements as well as the entirety of Chapter 2.

With Chapter 2 upgrade brings 20+ more hours of gameplay to the $7.99 game which brings the total game time to 40+ hours. Puzzle Quest was originally released for the Nintendo DS and PlayStation Portable in early 2007 and became a surprise hit.

Puzzle Quest brings together Role Playing and Match-3 gameplay into a harmonious package. Set in a traditional fantasy world occupied by knights, orcs, wizards and warriors, you must complete quests in order to progress the storyline. Beyond the actual storyline, there are also a number of side-quests that can also be pursued.

A free demo version remains available for those to try the game out.

Our gameplay video from Version 1.0 provides a feel for gameplay, though there have been graphics and performance enhancements since: