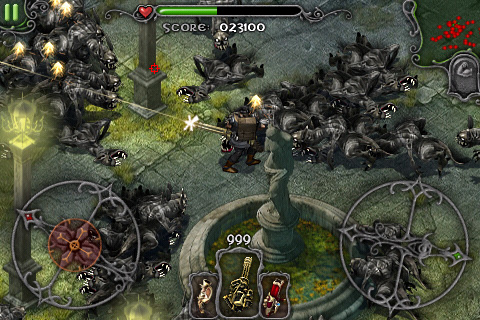 For some reason, certain upcoming games seem to capture the imagination of our readers, and this time around it’s Moregames’ iDracula which is being published by Chillingo.

As a survival shooter, the game appears to be a simpler affair than some had hoped but this new gameplay video gives you a taste of the action:

Directional and shooting controls are handled independently with two control sticks. The game is expected to be released on February 20th.

Update: More details from the developer:

This is not a RPG kind of game by any means. It has no storyline, no NPC, no other locations. It is actually the same genre as Crimsonland or Alien Shooter on a PC – only one level, but a lot of replayability to beat the high score. There’s also a Perk system like the one in Crimsonland or Fallout, it adds to replayability, too.

However, it’s just amazingly fun – the video is on early stages of the game, and doesn’t show the real fun behind.

The game will initially have one level (come on, it’s .99), however the update will be released in less than 2 weeks. This update will include more monsters, two new levels and probably new game modes. Probably more perks and some other features too.

Also, please understand that $.99 price is the introductory price, while the normal price is $2.99.
We are also considering a “premium" version of the game, which will include a RPG-like system, a story, lots of levels and different actions (and obviously, a higher price).

To answer the latest question – it’s not the autofire. You can release the button and the character stops shooting.