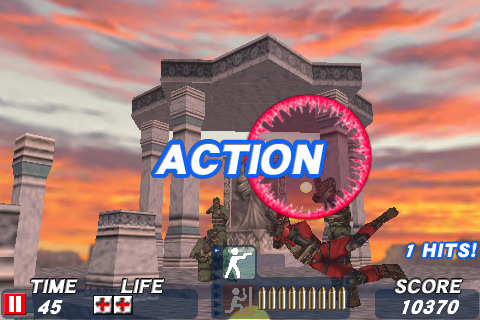 Time Crisis is a popular first person rail shooter that was first available in the arcades but has since made a move onto consoles as well as mobile devices. Wikipedia describes the gameplay well:

The franchise’s signature feature is the presence of a foot pedal that controlled whether the player’s character took cover (and was thus invulnerable but unable to shoot) or was commencing attack (and could thus attack but was vulnerable). A countdown clock, recharged by clearing an area of bad guys, forces the player to take risks and stay up and vulnerable most of the time, shooting quickly at any enemy on sight.

The arcade version of the game was a light-gun shooter which allows the player to actually take physical aim to shoot the enemies.

Obviously, on the iPhone, we are left without a gun or a foot pedal. Instead, ducking/reloading is performed by a tilt of the iPhone and shooting is naturally performed by tapping on the images of the enemies on the screen.

Namco has done a good job in providing a solid overall experience with the quality you might expect from a major franchise title. Gameplay is varied and surprisingly difficult, though there only appears to be 3 distinct stages in the Arcade mode of the game. Time Crisis Strike offers Arcade Mode (play through), One Stage Trial (try one of the stages individually), or Crisis Mission (special challenge modes). Most of the levels are locked and require completion of the earlier levels to move on.

But is it fun? I believe it may appeal to Time Crisis fans willing to overlook the lack of light-gun, as the game is well implemented and provides a reasonable challenge despite containing only 3 apparent stages. That said, the lack of a light-gun really reduces the gameplay to a rather simple mechanic (tapping on the screen) which didn’t happen to hold my interest for long.