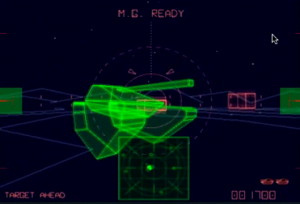 Retro overlord Peter Hirschberg of the indescribably awesome Luna City Arcade has dropped us a line to let us know that his 3D retro tank title Vector Tanks will soon be hitting the App Store.

Peter talks a bit about the game’s controls.

The control method for the game is, I think, a first. You use your fingers on the left and right of the screen to push up and down on the virtual “sticks". This gives you forwards, backwards, forwards and backwards turning, and turning in-place. You can see this in the video – the dots on the screen are where the iPhone simulator is interpreting my simulated finger presses. Hope that makes sense. It takes a minute to get used to but it’s really fun once you get it.

He indicates that Vector Tanks will likely be submitted to the App Store sometime in the next few weeks.  Features to be found either in the initial 1.0 relelase or a near-term update follow.

Have a look at Peter’s gameplay video:

As a big Battlezone fan and a bigger retro nut in general, I can’t wait to get my hands on this one for review.  It looks fabulous.  Arnold: this one’s mine!

Peter indcates that Vector Tanks will likely be priced at $0.99 or $1.99, but he hopes to release a free “lite" version as well.  Peter also brought us the retro Adventure for the iPhone and iPod touch.

UPDATE: I spent the last hour playing this game via Ad Hoc distro from Peter (thanks!) and I have to say, it beats the original Battlezone even in this pre-release form.  You folks are in for a real treat.  Ok, back to Vector Tanks now…