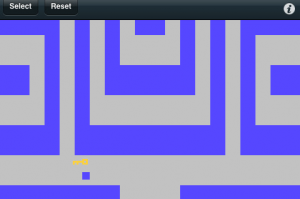 In 1979 game desginer Warren Robinett created the world’s first action-adventure game.  It was called Adventure.  It was released for the Atari 2600 game console.  It was historic.

And thanks to Peter Hirschberg (of the Luna City Arcade!) it is now available for the iPhone [App Store]. And it’s free.

The player’s goal is simply to find the enchanted chalice and return it to the gold castle. The player character, represented by a square, explores a multi-screen landscape containing castles, mazes, and various rooms. Hidden throughout the world are a sword, keys to unlock each of the three castles (gold, black, and white), a magic bridge which allows the player to travel through a wall, and a magnet which will pull any of these objects toward it.

This truly is an historic arrival on the iPhone platform, but be forewarned: as the game features authentic Atari 2600 graphics–rather primitive by modern standards–only true retro gaming fans will likely find this to be an unavoidable App Store download.  That said, we encourage gamers with even a causal fondness for the retro to check it out as well because…well…it’s free and it’s a great game.