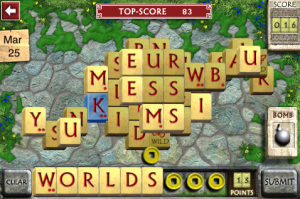 WordJong presents players with a Mahjong solitaire-style board covered with lettered tiles.  Players pick tiles to forms words which are then removed from the board, revealing tiles below.  The bigger the word, the higher the score.  Gold coins and bomb power-ups can be collected along the way.  A soothing, ethereal soundtrack plays throughout.

Have a look at a demo video of the Nintendo DS version.

WordJong for the DS, which is similar to the iPhone version, has generally received high marks from review sites.