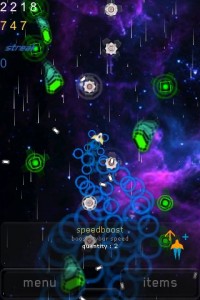 The game is set up like a traditional vertical shooter in which you control the flight of a spaceship. Instead of shooting the enemies, however, the objective is to dodge enemy fire and make it to the end of each level. There are 40 progressively difficult levels and 5 challenge levels.

Before I played, I found myself drawn to the premise of the game since by-the-skin-of-your-teeth dodging is one of the best parts of traditional shoot-em-ups. The problem with iPhone shoot-em-ups, however, has been the control issue.

Existing iPhone titles that have tried to deliver vertical or horizontal shooters have just not been good enough. Accelerometer controls always seem too clumsy and touch-screen controls too intrusive. Surprisingly enough, developer Yose Widjaja has hit upon a remarkably good control system for this particular game.

The ship itself is controlled using the accelerometer — which is nothing new — but also provided is an unlimited “bullet time" (slow motion) mode where by simply tapping down and holding your finger to the screen, the action slows down and the view slowly zooms in so you can perform more exact movements with the accelerometer. This method is shown well in the gameplay video embedded below.

While you might think that would result in the game becoming too easy, it certainly isn’t. The momentum of your ship and the momentum of the enemy fire make it surprisingly difficult to survive. The addition of 7 possible power-ups offer some inventive ways to help you survive, including some that allow you to fight back. Beyond simply beating a level, additional level accomplishments are awarded for not using “bullet time" or not using any power ups.

There are a few minor issues with the game, including the lack of more than one save game. It should also be noted that the overall game remains relatively simple as it is a dodging game throughout. Still, this game represents a unique iPhone experience that certainly seems worth the $3.99 asking price. Early adopters in our forums have been raving about the game. And with 40 increasingly difficult levels and 5 super-hard challenge levels, there’s plenty of gameplay to keep you busy.

Developer provided video below. The game was originally played with the accelerometer but saved and played-back for this video. So actual gameplay, but you don’t see the accelerometer usage or the touching of the screen.