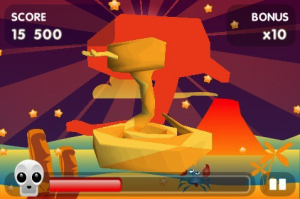 SPiN is a shape matching puzzle game that makes good use of the iPhone’s multi-touch interface to spin 3D objects around in order to match it up with the silhouette shown.  3D rotation is accomplished using left/right and two-finger rotation gestures.

The original SPiN is the winner of the IGN Editors’ Choice award, the GDC Most Innovative Mobile Game award, and the Forum Nokia Pro Best Mobile Game award.  And with good reason.  We found SPiN to be a highly innovative title that’s very well suited to the iPhone and worthy of more attention than it’s getting in the App Store.